I've been doing my Wars project (source on github, see first attached image) for a while now and it's gone through several iterations and a programming language change, coordinate system change, server messaging system change, and a ton of other changes. Now it's converging mechanic-wise to a nice tight package. I've even been making an AI opponent (source on github) to learn the game with.


I work on Wars in parallel with quite a few other projects (like PNDManager), so progress is a bit slow. On the other hand the game is very much playable, and I for one have been playing it with three friends nonstop (as in I always have an active game) since the first versions two years ago.


Presentation is still a bit lacking though. The web UI is passable, but could be a lot nicer for one, but the actual part I need help with is the game graphics. Fusion_Power made an awesome theme (see second attached image) for the rectangular version of wars, but alas it doesn't really work for the hexagonal coordinate system I decided to go with. The units would be a drop-in, but the terrain tiles would need to be redone. Entirely new themes would be very welcome.


A game theme consists of a sprite sheet and a settings file. The settings file maps the sprite sheet layout to the game concepts and provides other information such as hex size and player colors. The simplest way to make a theme would be to just draw over an existing theme's sprite sheet and use the same settings. There are some things to know about alignment and such before starting.


Being work in progress there's some possibility of breaking changes that would require theme changes (such as the coordinate system change that deprecated the fusion theme and a ton of maps I've made), but I think they're quite rare at this point.


Anyone interested in checking the current version out or better yet contibute a theme PM me for specifics. It's a development server so I may drop it at any time and it's quite slow because it's a development deployment, so I'd rather not yet get a flood of people that get their games cut short when I want to add new stuff unannounced . 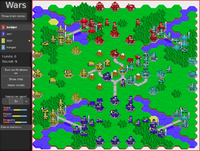 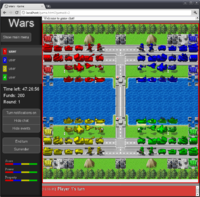 Would any of the work I did for openfire be any help?


That project has stagnated since neither of us has any time to program for it (Is there any point in releasing something completely unplayable?)


But it does include some textures and things...


not sure how well they are suited to a hexagonal tile-based game, though

Hard to say. May help someone in getting started, but I think it would still require quite a bit of wars-specific work on top of them.

OK. If anyone has time to work on this properly, feel free to ask for a zip of my artwork so far
You must log in or register to reply here.