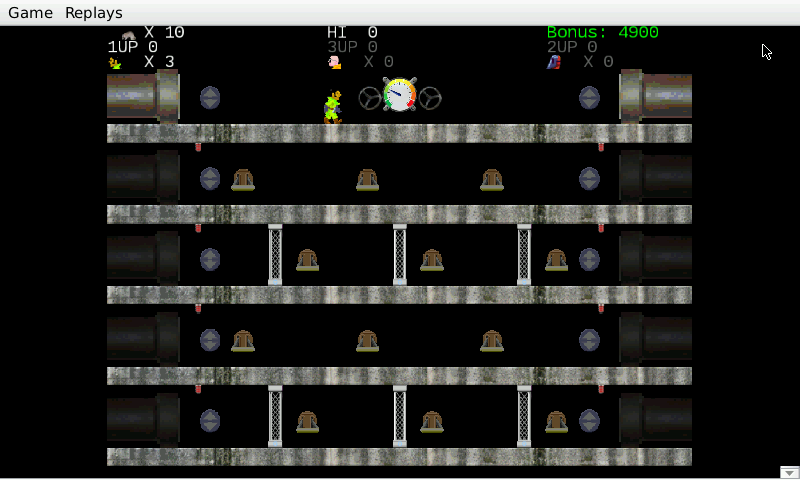 Ratcatcher is a simple arcade style game for three players, largely inspired by Mario Bros. and Taito's Zookeeper.
Players attempt to navigate a five level sewer, manipulating gates and other devices in an attempt
to catch rats while avoiding other hazards.
Deadly alligators prowl the pipes, noxious sewer gas will choke you, and sparking ball lightning
can cause the gates to malfunction! Mischievous sewer gremlins will manipulate the gates to foil your plans!

Ratcatcher is available for all major PC platforms, Linux 32/64bit, Windows, Mac OS X, Haiku,
and the game has even been ported to the Atari 5200 console.

Pandora port run with the help of the GL4ES library by ptitSeb. The sources are inside the PND.

This a GTK game (on Linux) and have a menu bar on top of the screen. You need to change the button to your likes.
I made little change to the code (using 800x480 resolution) and gaining a little more screen space removing the decoration of the GTK window.

The game have some little flaws that i don't know (for now) how to solve:
When the time Bonus end...it prints Time up and do nothing more...you need to open the menu and restart.
Also when a game end it not go to main title.
2 of the 3 demo replays seems to quit the game...(the first works).


If someone want to take a look at the code...i'll be gratefull.

Enjoy
You must log in or register to reply here.

Release Rage Against the Chemtrails