Pandora soft cases should use elastic to hold SD cards

While I generally like the Pandora soft case, I've noticed two flaws with it. One, my mother can easily remedy on her sewing machine (the white stitching on the zipper pull isn't secured well and easily loosens and pulls out with friction from normal use) but the other would require major surgery indeed:


It's way too easy for SD cards to fall out of the SD card pockets if the case is held or set down in the wrong orientation. (Here's an illustrative image using ancient 64MB SD and 16MB MMC cards I had lying around. I just laid the case out with the cards snugly in their pockets, then gave it a mild bump.) 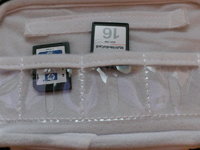 I often find all my SD cards lying loose in the case when I open it up.


The simplest solution I can think of would be to just use a band of narrow waistband elastic to hold the SD cards rather than the decorative but highly-directional cloth-trimmed plastic.


Oh, while I'm at it, what the heck is that velcro flap at the top supposed to be used for? I haven't been abnle to find any mention of it in the docs.
Last edited by a moderator: Aug 17, 2012

Stick two cards together in each slot, or put them in horizontally. Works for me.


And I don't know what the velcro flap is for either...

Velcro Strap is supposed to be for the Stylus but its sewn shut for whatever reason..

There's also a slit in the outside top of the case, that looks like it's there for storage of papers or something, but it is also stitched shut!

hdonk said:
Stick two cards together in each slot, or put them in horizontally. Works for me.


And I don't know what the velcro flap is for either...
Click to expand...

Two cards together vertically seems a bit iffy but one or two horizontally seems to work fine. Thanks for the idea. I'm just surprised I didn't at least think to try it myself.


(I'm usually pretty good about finding solutions that involve putting things in odd orientations and gaining more storage space in the deal. Comes with having far too much stuff to fit in my bedroom in normal circumstances.)
You must log in or register to reply here.

Need a Ready-to-use Image for left SD/MMC with Pandora OS Linux for the Pandora handheld ?
2

SD cards fail to mount properly on my Pandora