Its a tough road and I'm 50/50 on it -- if you catch the pnd up front and get it fixed, thats a win win win; but the trick is there is not just one download portal -- if you've got 5, and only one is (rightly) picky, then does that one get dumped by lazy developers for being over-correct?

A hybrid woudl be to allow it to handle sensible fails, and report validation errors so the uploader could get the file up and out, but be alerted of issues and repair them as time permits. ie: The question I suppose is -- do you let the file go up and out anyway, since it shoudl work everywhere even if a little sucky, and then let the dev fix it later. Or make him fix it right away, period end of story.

I think 'whatever' is a good answer, let dflemstr pick

heres my smoke tester before i upload: copy pnd to sd card, see its detected, see it runs, done.

skeezix said:
A hybrid woudl be to allow it to handle sensible fails, and report validation errors so the uploader could get the file up and out, but be alerted of issues and repair them as time permits. ie: The question I suppose is -- do you let the file go up and out anyway, since it shoudl work everywhere even if a little sucky, and then let the dev fix it later. Or make him fix it right away, period end of story.
Click to expand...

A possible compromise would be to allow the upload, but mark it as "unvalidated" or whatever. And by that I mean on the public/download side, not just for the person uploading it.

Yup, that's pretty much my procedure too. However, libpnd is (in this case quite justifiably) pretty lenient on what it accepts.
Last edited by a moderator: Dec 17, 2015

If the repo detects errors it could tell the uploader and give prompts to fix the PXML on upload?

We need at least one source of PND files where they've been tested and are guaranteed to work.

I think embedding information about the source would be useful, so we at least know where the PND came from (eg. Ed or Craig's sites) because otherwise there is no way to know (I keep forgetting where I get these things from and which is which).

Exophase said:
With the scale of the app store would it really be a bad idea to have review and validation required to prevent non-conforming PNDs from even making it in? After reviewing so many after the fact would you be willing to do something like that yourself dflemstr? Then everyone would be forced to learn how to do things right and the app store will be kept tidy.
Click to expand...

I already have this; that is how I got the data for the list in my first post

(Not for the official AppStore, but for my alternative AppStore codenamed 'Box', see my recent spam-thread with the same name)

I could add that functionality in the official AppStore as well, but let's just say that I don't enjoy writing Perl, especially not in combination with XML...

Now, random responses in reverse order because I feel like it and am in a HURRY...

@SteveM, I do query optimizations in my app that expect some fields to not be NULL. E.g., I don't do NULL checks on title strings after they are grabbed from the DB (if I did, I'd have to add an exception handling chain, because something like a titleless+descriptionless+iconless app would require special treatment indeed).

@SteveM_again For validation, there is an app that I wrote a while ago that is a little out of date, but that can be fixed easily (the source is attached if you want to give it a try; it's easy to read even if you don't know Scala)

@overjupiter I prefer (from my Box webapp): 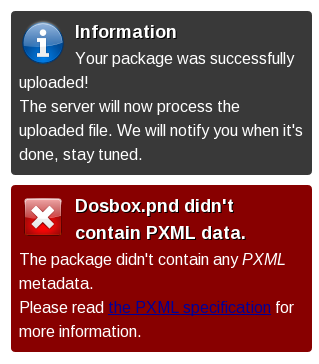 (The red box shows up after the validation is done obviously)
Last edited by a moderator: Dec 17, 2015

Surely you can't expect the average developer to do that!
Last edited by a moderator: Dec 17, 2015

^ seeing as some of the dev's don't even have hardware yet, your right Sphinxter

But in general, I'm sure most dev's have also stipulated that any software they release atm is beta, and do give it a quick "does it run" test and are glad to hear feedback so they can improve it

JayFoxRox said:
I'm surprised that you didn't find more than that....
It's a mess
Click to expand...

Yes, we call this the early days


JayFoxRox said:
I said it on the IRC channel before: Drop PND now, improve PXML or switch to some other standard and only keep the PND loader code etc, but make a completly new format like dflemstr suggests for the whole package.
Click to expand...

PND system is good actually. but PXML.xml need to be improved.
Come on, even the official scripts to create PXML.xml files had category wrong (I have written an improved version, there still room to improvment still)
With a bit of tweaking, my packaging time is now in the average of 2 minuts. Packages are valid.
But as it's the early days, thing have to settle down, thank to dflmstr, this will go forward.

JayFoxRox said:
I also had some PXML files which named invalid files as preview pics, others had: "todo" as the german description so it wouldn't even display the english fallback.
Click to expand...

Yep, every thing work fine with any size. But if anyone want a standard here, why not.


JayFoxRox said:
some PNDs use the author tag for nicknames or who did the port, others for real names and the original devs and some are using the homepage tag for the projects page, others for the authors page and so on.
Click to expand...

That's a good one, we don't have a porter tag, an author clone would fix this problem
Last edited by a moderator: Dec 17, 2015
You must log in or register to reply here.

Pandora Validating my .pnd with pxml-validator : a whole bunch of errors