As for a HOWTO, I don't really know what to say. I just looked at the pinouts for everything and just wired it up. I can give you all the resources I used though, and my parts list:

EXT connector pinout: http://wiki.gp2x.org/wiki/Image:Bob_ext.png
(The USB host part and the TV/Audio out part is all that I used.)

USB filter: http://wiki.gp2x.org/wiki/Image:Bob_usb_filter.png
That picture illustrates how to wire up the filter circuit for the USB host port. For some reason or another, the GP2X's USB signal is quite crappy, and this circuit smooths it out.

S-Video pinout: http://www.ghearing.com/?Gabe:ATI_All-In-W...t:SVideo_Pinout
All you should be concerned with here is the 4-pin version. The luma and chroma should be hooked up to the EXT port's VIDEO_Y and VIDEO_C pins.

Parts:
- S-Video female jack (4-pin)
- Two RCA female jacks
- Two 50 pf capacitors (the filter circuit asks for 47pf, but 50pf worked fine)
- Two 33 ohm resistors
- Two 33 kilo-ohm resistors
- Samsung E810 USB cable (inside the E810 USB cable's EXT connector is a relatively easy configuration of the 24 pins for soldering. You'd think 24 pins in such a tight spot would make it ridiculously hard to solder, but the way they're spread out is quite clever, and it makes your life a lot easier. I don't think the E810 serial cable is like this, so I'd definitely recommend getting the USB one.)

I just want to point out that there's nothing new in the information that I posted above. All I did was scrape information from the wiki to construct my BOB... all the hard work in figuring out the details was done by other people before me.
Click to expand...

Everyone seems to have ignored my how-to :wacko: , but thanks for making a great BoB, that is how to do it, and I never thought of binding the USB jack to the board like that, it could definitely work. Will that fit in a project box? If so then we can have a BoB in a case for less money than the commercial one (maybe even put a stand on top, a 1.8" HDD and batteries inside ).

I have even higher-res photos of my BoB, and I have borrowed a camera from a friend so I expect to get some nice shots of the super-mini USB termination circuit, next to my machinist's ruler it will indeed give you some sense of scale.

Now that you can see what is involved, many of you may realize that USB can be added to the current TV-Out cable for under $1 in quantity (several hundred), and demand should be high. It is literally just 4 extra wires; a very simple, very tiny circuit; and a USB jack. Now that I am getting another GP2X (been without for ~6 months or so) maybe I can cobble up a USB project board using the micro chip.
Last edited by a moderator: Feb 5, 2016

Heh, I hope that's a compliment he never gets from the ladies...
Last edited by a moderator: Feb 5, 2016

I forgot to add earlier. Why did you solder the board upside down? Usually the through-hole components go through a hole and then get soldered, it would have made the whole thing a lot more stable and easier too.

I see your way sort of works, but if you flipped the board over you wouldn't have needed any hot glue and everything would be anchored to the board when you finished.
Last edited by a moderator: Feb 5, 2016
G

hahah, nubie, I'm surprised nobody else has pointed that out yet.

It's upside down because my dad drilled the holes for the SVIDEO and RCA plugs the wrong way, and I didn't feel like redrilling them myself (or making him redo it.)

If I ever build another one, I'll do it the right way.

It's upside down because my dad drilled the holes for the SVIDEO and RCA plugs the wrong way, and I didn't feel like redrilling them myself (or making him redo it.)

If I ever build another one, I'll do it the right way.
Click to expand...

I can see that now, I didn't realize you had to drill in holes at first.

I want to make a USB/TV cable that is so small it looks at first to just be a USB adaptor, but there is a Camcorder-style 3.5mm jack on the plug that will take a 4 conductor A/V cord.

I thought techfreak was going to be doing something like that, but he is in turkey anyway so I may not have heard of it yet. He is with the turkey distributor.
Last edited by a moderator: Feb 5, 2016
J

hi!
i thought, i show my bob too

the second version is much more robust and compact (ca. 40x60x20mm)
it has a mini USB hub inside
and i used four 3.5mm jacks, nubie mentioned
two for 5V-in and 3.3V-out... they are on the bottom of the box, so i can plug a battery pack on it... or a small 3.3V -> 5V converter... or simply use a power supply
then there is one jack for S-Video and one for Serial... i use a simple 3.5mm to DE-9 cable to connect the serial to PC and a 3.5mm to mini-DIN to connect the S-Video to TV
i also want to make a 3.5mm to USB to power the box with my laptop

and here are the pics:

the original usb hub i used

I'm very impressed. You should market them you know

You HAVE to make more of them and sell them. You just have too! You will make money on this...
Y

Yes. I would pay good money for a nice BoB that's portable.

Have you given any thought to this? (Go large/Album): 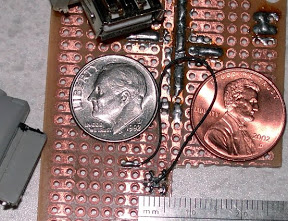 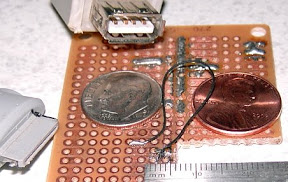 It terminates the USB in one simple chip. It is very tiny, perhaps too tiny though.
T

I thought the first one looked cool until i scrolled down and saw the 2nd one damn man! well impressed! Please make some! (In black or silver though lol) ... Your GP2X community NEEDS YOU!
J

That BOB is awesome!... what kind of cable do you need to plug in for tv out?
H

S-Video. S-Video cables are commonly round and have 4/7 pins and a plastic key.
Last edited by a moderator: Feb 5, 2016
J

This is a cool tiny thing... i made my own termination board, but i definitive could use one of these
The problem is, that i have no idea, where to get this pice in austria/europe

jep... the S-video mini-DIN plug has 4/7 pins. But S-video actually only uses 3 wires: Ground, Luminance and Chrominance
so i use a 3.5mm stereo headphone jack, because it is smaller than the mini-DIN
to connect it to the TV, i used a 3.5mm connector, a 3-wire cable and a mini-DIN connector and soldered the right pins
Last edited by a moderator: Feb 5, 2016
Y

Ouch...It's slick looking, but I don't have that kinda cash.
J

of course... i don't think, anybody would spend 140,- for this box...
and that's why a private individual can't make money with such a project
but... as nubie always says: it isn't hard to make your own box... it's only time consuming
J

well... back to waiting for the official bob. I hope it can fit in my pocket.
You must log in or register to reply here.

M
Do It Yourself Usb Host Cable