News from the Giana's Return Team!

We might have two nice releases in the next few weeks yay! 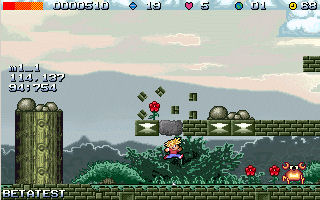 First of all, let us tell you that the project is not abandoned and we won't abandon it

Everyone has already read the story about the graphics artist issues severall times already and you boys and girls are probably already sick about it - which would be pretty much understandable. A pixelgraphics artist from France named [thUg] who was also active in the Amiga demoscene offered his help, which we will glady accept - things should move on soon.

So this was the status about Giana's Retun itself... now time for something new...

We got hands on a very talented (but unfortunatly not free) graphics artist who is currently drawing sprites and tiles for a new Sci-Fi Jump'n'Shoot. We are taking essences from "Hard'n'Heavy", "Metal Slug" and "Turrican" and mixing it up into a brandnew game, based upon the Giana's Return engine. Of course we could have got that graphics guy also for our main project, but the background of this story is a bit more difficult and would probably fill a few pages to explain.

We have the main sprite "Little Bastard" ready and animated, white a nice and proper gun in his hands. Within the next three to four weeks, we should have everything ready to start. The game itself will be less complex than Giana's Return as we want to head towards "Hard'n'Heavy" which was dealt as "The Great Giana Sisters II".

We don't have a music artist for this, as Operator is still busy with the Giana's Return music and sound FX. Our organizer is already having some artists in mind, who could provide proper chipmusic. This time it might not be "exclusive" tracks as for Giana's Return, but be sure that the music will rock the house - or better said "chip" the house.

PS: We answered most of the people who offered help, but most of them didn't reply, did you guys checked your spambox folder?

Interesting. Looking forward to seeing them in action.

Cool. Will look forward to a release

I feel a great disturbance in the source

apogee indeed had many kickass games, just remember commander keen
Last edited by a moderator: Dec 18, 2015
You must log in or register to reply here.