Slight newbie mistake there; I'd solder the diodes and individual resistors first since they're the lowest height component, so they can lay flat on the desk when you turn it over and don't have to rely on the tight bending of the legs. Then go up in height so the resistor packs are probably next. But at least he didn't start with the electrolytics or the chips I guess.

thought the same myself. Its been 35 years since i was on the production line stuffing and soldering boards . but it was always smallest to biggest.

levi said:
Slight newbie mistake there; I'd solder the diodes and individual resistors first since they're the lowest height component, so they can lay flat on the desk when you turn it over and don't have to rely on the tight bending of the legs. Then go up in height so the resistor packs are probably next. But at least he didn't start with the electrolytics or the chips I guess.
Click to expand...

spud42 said:
thought the same myself. Its been 35 years since i was on the production line stuffing and soldering boards . but it was always smallest to biggest.
Click to expand...

yeah something I got to consider when I start my big solder project. it's a big board, was hoping to solution some kind of easy way of flipping the board.

There are PCB holders I've seen in videos, but nothing the size of an 80s computer. But I've no idea what's available really, or the cost.

all we had was a bit of 2x4 with a 45 deg table saw cut in it... sits the PCB at a good angle to stuf 20 boards at a time... ahhh the good old days of sniffing lead solder fumes..lol

Yes, when gasoline had lead I could stay hours near the exhaust, smelling the gasoline. And play with asbestos planks. Good old days... before the safety belt.

I suspect the fumes off leaded solder are actually much the same as the fumes off unleaded solder, given the boiling point of lead is ~1750 degrees Celcius, unless any of the inclusions to meliorate the lack the lead in the mix boils any lower. Meanwhile gasoline gives off entertainingly exciting benzine ring compounds and perhaps more interesting shorter compounds. Not to mention the action of asbestos filaments on your lungs.

A few months have passed, there are fantastic demo's created.


Who does NOT love this mahna-mahna muppet song? Have a good chuckle!

I like this one for the funky music and the colorful logo
source: https://csdb.dk/release/?id=203391

Creepy one! (warning: has lots of flickering - seizure warning)


This one is /pol
https://www.youtube.com/watch?v=S15Wn50lKwA 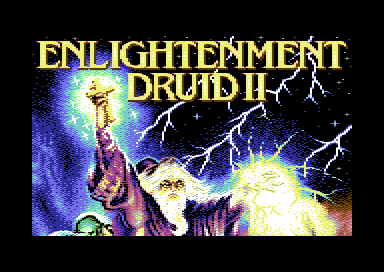 Commodore 64 One-File Demo: Druid Too by Atlantis and Fairlight. Released on 3 January 2021

Such a good tune: 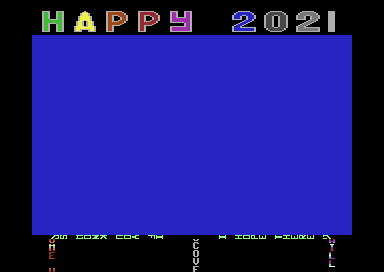 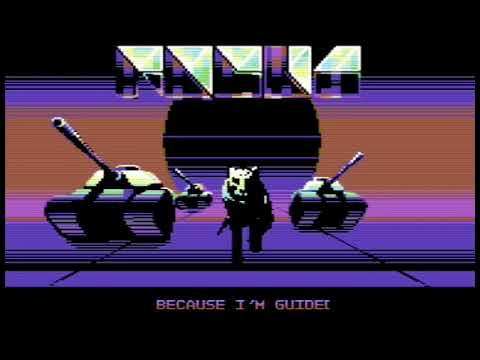 With a little bit of code by yours truly

The C64 was well known for it's SID music chip. There were a few early samplers out there at that time, but quality+price-wise they could not tip to the C64 (except for the RAM part) at least, until the amiga came around.

So the second music software I bit my teeth on was MicroRhythm+, a small sampler which sound like this

Here is micro-vocal (which has a vocal subset of samples):


It features 4 bars, and you could string these together to get a long beat.
Here is a micro-rhythm with drums samples example (just a few seconds before the youtuber starts making music on top of the C64 sounds):


There was another featuring the guitar sample from "owner of a lonely heart" by Yes. And you could actually recreate their song pretty accurate.


Musical notation is well established for classical (normal instrumental) music. But for beatboxing you need a special notation. Micro-rhythm was my first encounter with a way to write down beats.

Here is VerbalACE reading and interpreting his notation out loud:

But it was only when the Amiga came out that we got the MOD music modules. Here's a DJ explaining how he got started and a small cameo/picture of Fatboy Slim with his gear:

And we got gems like "Guitar Slinger" (by Jogeir Liljedahl) but that's Amiga, not C64:

But with a bit of C128 basic you could play a sample: 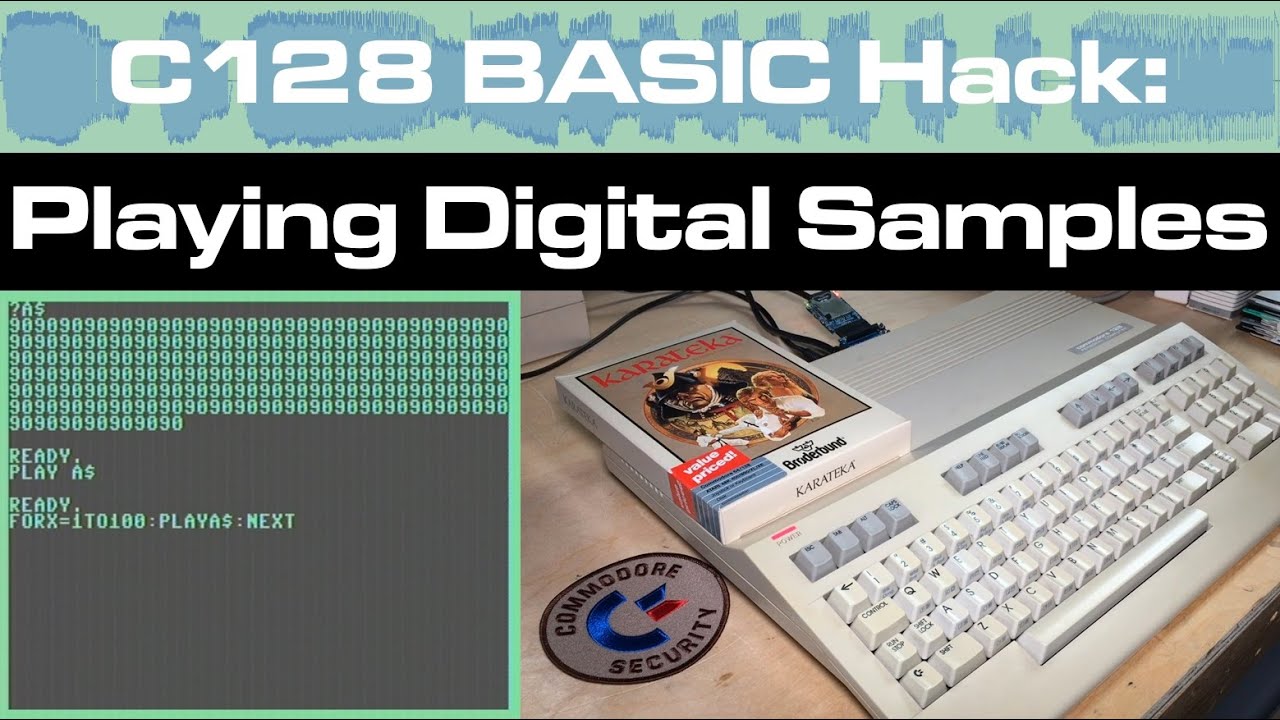 Further discoveries about the Commodore 128’s PLAY command bug (not a bug?) lead to a proof of concept to play digital audio samples in pure BASIC - no machi...

Interested in the C64 assembly language and want to dip your big toe into it?

This video shows how to make a very small "Hello World" assembler:

FBnil said:
But it was only when the Amiga came out that we got the MOD music modules.
Click to expand...

Yeah, I wrote a few mod music files back in the day using various trackers, and listened to a lot more. The Amiga and Archimedes were limited though because of their 8-bit audio. I'm not sure why trackers never really made it into the 16-bit scene, the samples used were often shorter than those used on professional sampler hardware, but it was fine for simulating synthesisers and strings.

levi said:
I'm not sure why trackers never really made it into the 16-bit scene
Click to expand...

Because it was not seen as professional. All expensive hardware samplers got used and software samplers were not a thing yet. Mostly because, well my experience: During these fancy presentations in a hired hotel wing, they gave a presentation where they could not get down the hiss to an acceptable studio level. I mean, even just output. Worse when they recorded through it and then played it back. PC's were not shielded enough to output analog audio; you really needed the good gear. By that time the samplers had enough RAM and floppies to store samples and that is what stuck.
And it's too bad, I've seen the low hiss on the Pro Audio Studio/Spectrum (PAS) and it's great (just not well supported by trackers, which just used the 8 bit SoundBlaster compatibility instead of the clear cristal 16 bit output). Once the AWE64 came out the race was already lost; but years later software would come out like frootyloops that still shows it's tracker roots, but is more than that.
But I also think it is that musicians are used to ready-to-play hardware things and not programming things. So being a good musician AND nerdy enough to run some obscure software then finding a PC that is certified low-noise... well... just buy this other thing and you are good to go, ready to make music, instead of tinkering.

Here's what it looks like (which left me drooling at the decoded graphics):

TIP of the day: Play Chiller 2

Wanna buy a new game? I recommend this one: 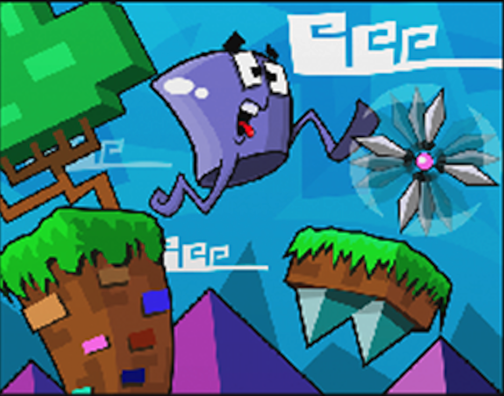 I'm intrigued by the c64 and the demo scene. also the Sid chip. those games look and sound so hacky and beautiful. I also love the form factor.

netcat said:
I'm intrigued by the c64 and the demo scene. also the Sid chip. those games look and sound so hacky and beautiful. I also love the form factor.

Ok, so these are just sounds made on a C64 (or emulator), that the devices are able to reverb, reverse, echo, cut, adsr, sequence, arpeggiate, etc. It's just too bad the video is likely one person showing off the same style on different devices, instead of different people that are able to also give a feel of what ELSE you can do with the samples.

I'm missing the way you can use the ring-modulator and arpeggio like on the C64. (and I'm certain it can be done, it's just not showcased). The name 303 suggests it's just a drumkit, without the strings you can get out of the C64. Fair enough, but there are much more bassdrops you can make on the C64 (but maybe they only show part of it, and not all of it?)


I like the synths more, for example the ones that are in a VST plugin called VSTSID


Then there is this song. Which swings from "not bad" to "cringe" in my head. It's a re-interpretation, and it sounds full (hey, more than 3 sound generators) but some of the sounds are not faithful enough and miss the mark completely, while other sound better than the original.

netcat said:
I'm intrigued by the c64 and the demo scene. also the Sid chip. those games look and sound so hacky and beautiful. I also love the form factor.

I don't think I've heard the C64 sid chip producing a pure sine wave before. Of course he doesn't claim all the source sounds come from the C64, but to deserve it's place in this thread I guess it kind of needs to.

The basslines are all c64 in the vein of 303 acid. They do sound relatively tame for sid, probably the lowpass filter or maybe it's an 8580. Less glitchy, more sustain, easier to use if you don't want to be confined to chiptune / novelty.

I think I've already posted this but it's a c64 game my friends made. And I like the music.

Nice game. I especially like the novelty of getting shot or colliding with the enemy doesn't lose you a life, just takes some score off you. It does make it pretty much a score attack game alone, but that's fine for a change.
You must log in or register to reply here.