A Prize For The Winner Of The First Season

Well, unbeknownst to (almost) all of you, there actually is a prize to commemorate the first season of the Retro Offline Tournament. It's a Flynn's Arcade token, donated by a relative of mine who, upon hearing me speak about the league, insisted that we here mark the first ever season in the most fittingly geeky way possible with an appropriate prize at the end of it. Specifically, the prize is the very token pictured below; 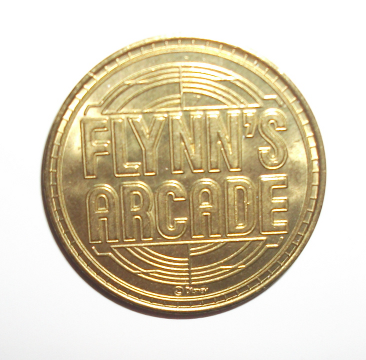 As you can see, it has the Flynn's Arcade logo - from the movies Tron, and Tron: Legacy - on the front. (On the back it bears the name of the "ElecTRONica" attraction from the Disney's California Adventure park.)

If the winner of the first season (Caine, I believe that's you, isn't it?) could please drop me a PM with the details of where to send the prize, I'll get it in the post next week.

As my son is named Flynn, I am overjoyed to know that there is such a thing in the universe.

AND: I will now build him his own MAME cabinet, and name it "Flynn's Arcade" ..

Oh wow, that's a really awesome prize! It's so geeky, I love it!