The pyra use a multiple boards design. 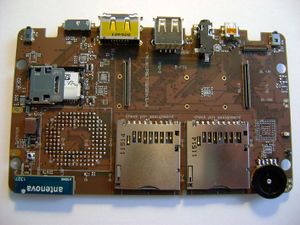 This is the largest PCB in the Pyra, with a wide range of different functions. It could be compared to the motherboard in a traditional desktop computer, with the addition of a keyboard and gaming controls on one side. Display-support hardware (the Displayboard) and the processor itself (see CPU-Board) are each on separate PCBs.

The Mainboard includes the following hardware:

The board with the CPU, GPU, RAM, and eMMC memory which detaches from the Mainboard. Depending on various commercial and technical considerations, new CPU boards may become available to upgrade existing Pyras. 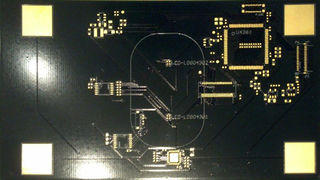 This is a 720p, 8-bits-per-channel LCD with a resistive touch-sensitive layer suitable for use with fingers as well as a high-precision passive stylus. Multi-touch detection is also possible to a limited degree. The market for small LCDs is largely driven by smartphones, making it prohibitively difficult to source a native landscape display. As a result, the Pyra uses a portrait display, with a dedicated video rotation chip interfacing with the CPU/GPU

The tiling and isometric lightweight engine for rotation (TILER) resides in the Memory Subsystem of the OMAP5 and Manages the virtual address, data, and byte-enable to match the requested 0-, 90-, 180-, or 270-degree orientation in a tiled 2D addressing space. Previously there was only an slow (because of Bugs) Driver Available, thus the decision above. Later an Community Member (Zmatt) wrote an new Driver, which performed perfectly.

The Pyra has a digital video output supporting HDMI 1.4a, HDCP 1.4, and DVI 1.0 which can be used independently of and at higher resolutions than the built-in LCD. (Confirmation Needed)

The OMAP5 (OMAP5432) is the SoC (System on Chip) of the Pyra. It's designed (and manufactured?) by Texas instruments. It resides on the CPU-Board, with these specifications:

The Pyra has four USB ports, as detailed below.

This is a straightforward USB port as found on many desktop PCs. I can be used for keyboards, mice, USB memory sticks, network adaptors and many other things (subject to driver support)

This can be used as a simple USB2 port as above. Although this uses a blue Connector designed for USB3 Ports, it is not capable of USB3 (with the current CPU-Board). The additional pins are used for (e-)SATA Lanes for to an Adapter. See Storage for more details.

This can be used much like the full-size USB2 ports, but at higher speeds and with the obvious requirement for a passive adaptor when using most peripherals. It can also be used to charge the Pyra (either from another computer, or a mains adaptor) and to operate as a USB slave. The Pandora has software allowing it to operate as a USB mouse, joystick, keyboard or SD-card reader in slave mode. It is expected that similar software will be available for the Pyra.

This is not a general-purpose USB port (as a result of limitations of the SOC) but can be used in two ways:

Software support should be available for (at least) file transfer and A2DP audio. This means all standard Bluetooth headphones and speakers will (probably) work.

The Modem will be a PLS8-E (EU Version) (Features for both Versions, Datasheet) or PLS8-US (US Version). It provides GSM, LTE and GPS. SMS and voice is supported and tested, however it will fall back to 2G for voice on most networks. There's a CPU-GPIO controlled FET switch to disconnect the whole modem from power so you don't have to rely on the closed-source modem firmware. Also, there's a current sensor to detect if the modem is doing unwanted things. [3]

The Modem also supports GPS (optionally Cell-Tower assisted GPS[3]) and GLONASS. So you need to buy an Modem Unit if you want GPS. 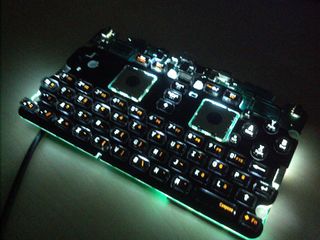 See the Keyboard for more informations.

Two nubs will be used per Pyra. 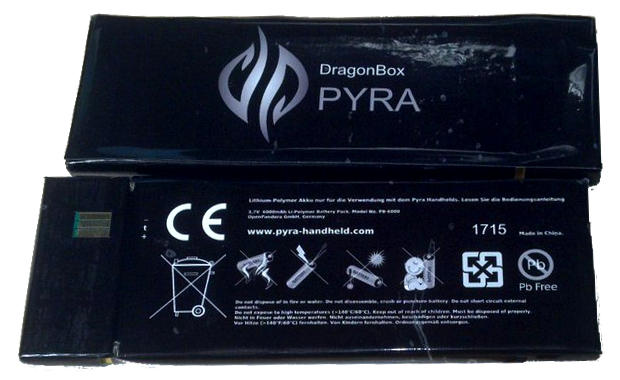 The Pyra will charge from a standard microUSB cable, much in the same way as any other (non-apple) portable device made in the last few years.

The Pyra has a range of options for data storage.

Solid-state memory with 32GB capacity on the detachable CPU-Board, where the default operating system will be installed, and where you can put games, applications, and other content.

The Pyra has two full-sized SDXC card slots, externally accessible, via an MMC interface (not USB).

It also has a microSDXC card slot behind the battery, which shares with the internal eMMC memory the same interface to the SOC, but which is controlled by a software-managed switch. This theoretically allows both to be accessed near-simultaneously, albeit with a decrease in throughput.

eSATA support comes via an active Adapter which plugs into a USB port, but it is not a USB-to-eSATA adapter -- the additional pins that would normally be taken up with USB 3.0 signalling have been used for SATA signals. This allows far higher transfer rates than would be possible over USB. In addition, should a SOC become available in future with a second USB 3.0 interface, it could be routed through the existing connector to provide a dedicated USB 3.0 host port. 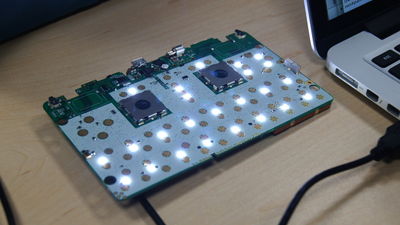