We have Python on the Pandora, that means that we can run Ansible on top of it.

At initial run it will create a work/ directory with a .bashrc , ansible.cfg, hosts files which you can tailor to your own needs.
Knowledge of Ansible is required, so

Enable the Pandora's wifi or enable the network.
Go to a fresh new directory on your SD card and from there:


Code:
After a while (many files to unpack) it will create a subdirectory called ansible (64MB) and a few symlinks that change the behavior.

Now time to test it (takes a while to load and return with an answer):

Next is the configuration file, ansible.cfg


Code:
This overrides the default host list location (/etc/ansible/hosts) to something you can write.
and now you can create a hosts file, with, for example (assuming you have a few virtual machines with those IP addresses):

Not sure what you can do with it on a Pandora. It is slow (but not by much compared to a dedicated system), but it works
If there is interest, I could make a pnd. 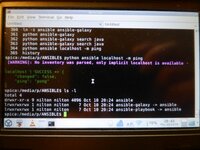 If you only have a Windows 10 machine and want to give Ansible a spin: https://www.jeffgeerling.com/blog/2017/using-ansible-through-windows-10s-subsystem-linux

@FBnil : nice ! Trying Ansible on the Pandora has been on my TODO list for a long time now (using it on a daily basis at work, nice piece of software IMHO). My plan would be to write Ansible roles for each of my few PNDs and push them to my GitLab repo, that would automate things nicely I guess. I'll give it a try ASAP. On a side note, are there any benefits from using that portable version over the "regular" one which should come with "pip install" in @ptitSeb Code::Blocks ?

@Magic Sam Thanks for trying it out. Well, if you "pip install ansible" I guess you will get 2.8.5 (released a month ago) and the other one is stuck in 2.8.0 and probably will not be updated anymore for Python 2.7 (which will get out of support by 2020).
Otoh, when installing, say, new roles, you can use ansible-galaxy and you will get the latest-greatest on both platforms.

The Code::Blocks (all hail ptitSeb) already has Python3 and that python is more compatible with the current Ansible code. (but the strategy is that 2 still stays supported)
We'll have to do a benchmark to test if Python2.7 is faster than Python3 when running Ansible. My gut feeling says that Python3 is slower, but would you notice? Probably not (unless you got huuuge playbooks ).

It runs on the default Python that the Pandora OS has.

A new build is coming, but I will play around a few hours and see if I find more.

@Magic Sam I put the new 2.9.0 in the Repo. I tried Python3 from codeblocks but I did not manage to make it run (for that speed comparison I wanted to test). Did you had any luck?

I also thought I had this orageclock.rc all figured out (change the time/date on the taskbar using Ansible), but alas, I am not able to make XFCE4 read the rc from the commandline


Code:
You must log in or register to reply here.