QUOTE
"SDL Asylum is a C port of the computer game Asylum, which was written by Andy Southgate in 1994 for the Acorn Archimedes and is now public domain. It has been tested on Linux, FreeBSD and Cygwin, but it should be possible to run it on other platforms which support the SDL graphics library." 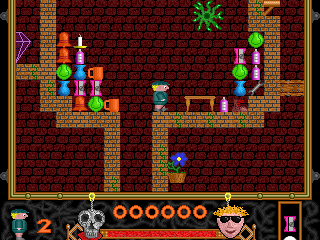 while looking for some games to port a few months ago i already came across this game and i had it compiled for arm which was basicly just a recompile but the game ran utterly slow and i had no idea as to why so i didn't bother with it anymore and i think i even deleted it, i was just testing some games.
I had the same problem with roadfighter
I

Thanks for trying.
S

I would be glad to take a crack at this as soon as I have a GP2X again. There is [virtually] no floating point in the code, and it seems pretty straightforward... Not sure why it would have run slow, but it's worth investigating.
F

Hi, I maintain this game. There's a lot of slow FP in the music code because every note is (completely unnecessarily) resampled every time it is played. I fixed the analogous problem with the sound effects a while ago (because enough simultaneous explosions would slow down my desktop) but haven't got around to dealing with the music. So for now I suggest disabling the music player (or better, fixing it and sending me a diff ).

Also, I don't know anything about the graphics hardware you're using but try with the latest repository version as I've abstracted some operations which were formerly accomplished by bit twiddling into SDL blits.

Oh, and the original game had a QVGA mode option bolted on in a later release: it lost the top 8 and bottom 8 lines, as in your picture above.
You must log in or register to reply here.