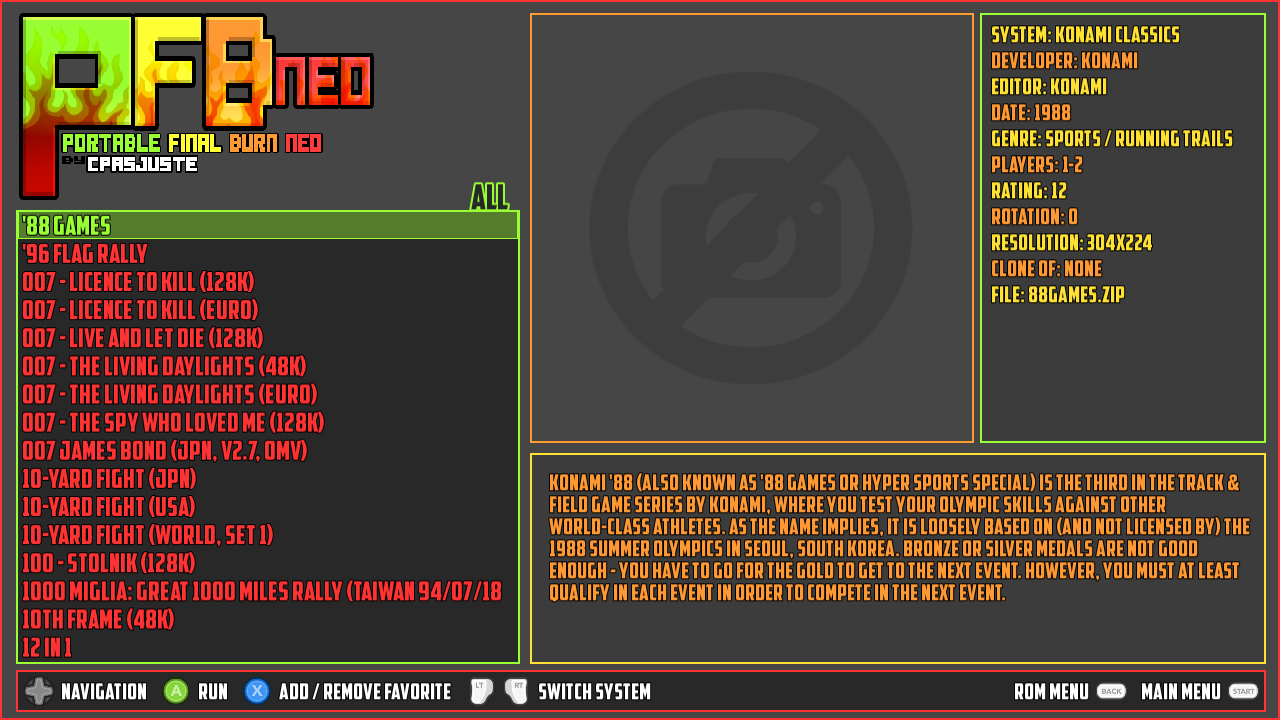 This will use gl4es for the rendering. I ported only the OpenGL 1.x backend, so no shader effects. Also, if the emulator goes to fast, update gl4es (just update the system with `sudo apt update && sudo apt upgrade`), to have latest version thta include a fake VSync option. The keymap should be Pyra friendly.

You may need to install libglew2.1 and a few other for this one to work. Use

Code:
if it doesn't start.

By default, all roms are fetched from some folder in "appdata/pfbneo/roms", but you can redirect the folders by editing "appdata/pfbneo/config.cfg" after a 1st run. Note that you cannot add new folder, it's 1 folder per system.

Nice, allthough i first have to read what Final Burn Neo was again ^^, Wasnt this some sort of a Arcade Machine Emulator?

Yes, FBneo is based on FBalpha (I guess), based on the original FinalBurn.
It's a multi arcade machine emulator, similar to Mame, but more oriented toward speed. It emulate Arcade NeoGeo, CPS1/2/3 and much more (and even some home console too)...
Last edited: Sep 2, 2022

Ah ok, like Mame, Arcade Machines ^^, I think i will try this tomorrow evening then, and show some Gameplay on Sunday

Well I know what I'll be playing with this weekend.

I just noticed that the package doesn't have the "libglew2.1" dependancy noted. But it's needed, so use

Code:
If the program doesn't launch.
I will not upload a new package just for that (especialy because the automatic dependancy installation is not working), but next package will be up-to-date.

i want to play nba jam so bad

One System more for my Pyra Playing Backlog ^^ But its nice to see some more Software ..

netcat said:
i want to play nba jam so bad
Click to expand... 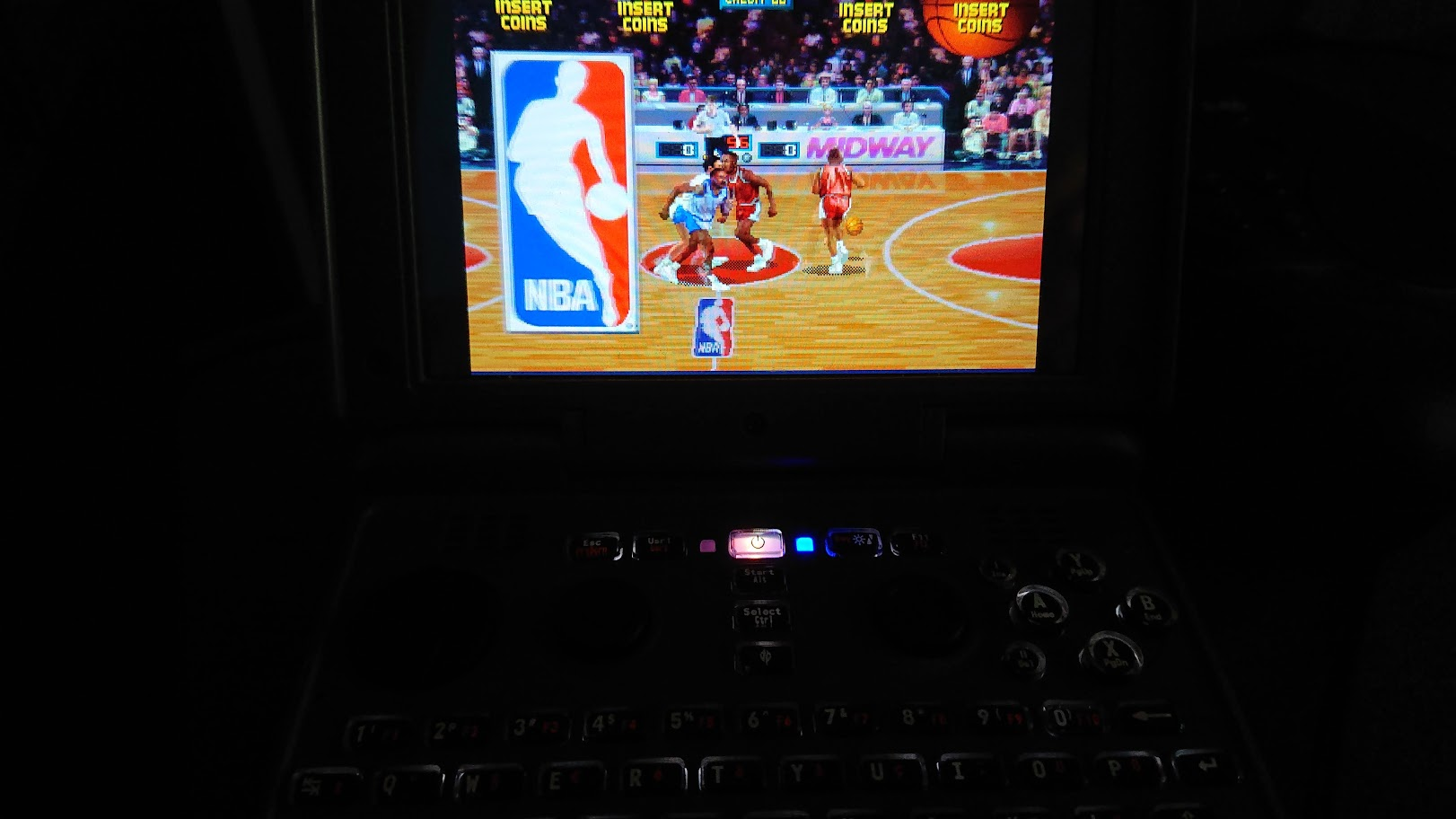 Working fine (at 60fps, no frameskip)

matzesu said:
Ah ok, like Mame, Arcade Machines ^^, I think i will try this tomorrow evening then, and show some Gameplay on Sunday
Click to expand...

Not really like MAME. The MAME project intends to emulate almost all of the chips in the system to emulate old games in their original form. I never got the impression had that in mind, it was just a way to play slightly less old games than MAME supported on the resource limited computers we had at the time.
Edit: It's probably more directly comparable with mednafen, in that it's a suite of emulated cores and other bits, just mednafen is more based on home consoles, whereas for this the only home console games you can play on it are Neo-Geo MVS games.
Last edited: Sep 2, 2022

Working fine (at 60fps, no frameskip)
Click to expand...

CPSI and II are 16-bit (68000 based) while CPSIII is 32-bit (SH-2 based). The Neo-Geo was also 68000 based. That game looks like a Neo Geo game to me, while some CPSII games had big sprites they generally didn't move that fast across the screen.

levi said:
CPSI and II are 16-bit (68000 based) while CPSIII is 32-bit (SH-2 based). The Neo-Geo was also 68000 based. That game looks like a Neo Geo game to me, while some CPSII games had big sprites they generally didn't move that fast across the screen.
Click to expand...

NBA Jam is a Midway arcade game from 1993. It's using typical Midway hardware of this era, with a TMS 32bits CPU and a 6908 8bits CPU for the sound board. The video have some hardware scalling capabilities.

Oh man have i had a miserable friday night / saturday morning.

Finally i get around to using my (first!) all sanwa joystick playing NBAJAMTEv4 on rpi. immaculate experience. I love this game!

Then my family demand full dominion of the television so i leave the sofa and try to get things working on my debian desktop. Hell ensues. FBNeo & pemu-6.6 don't build because of lack of SDL.h (among other things). But now sudo apt-get install libsdl2-dev wants' to DOWNGRADE libpulse. Fuck no. I am not risking system audio for this. I could just copy SDL.h and hack the include path but that could be a can of worms. I'm too old for this.

There's pfbneo-linux binary available so I try that. Of course it can't link. FFS. This is the era of big data, why can't we have big static binaries???

Also, at one point installing mame via apt-get (I know I know - my fault for using a package manager - what year is it?) and first thing that's odd is it installs some libreoffice stuff. then it UNINSTALLS KDE. WTF!!!! I don't use kde but i do use krunner. There is a dependency clash so I uninstall mame and get kde back. I feel lucky. apt-get is a pos.

Ah... flatpack - a ray of hope. i like the concept. So I install mame there. Clunky and i can't get it to recognise select & start but whatever. Only the first NBAJAM works - not TE. Internet says it's mame version incompatibility and i have to try different versions of mame. Fuck this. Actually i don't believe it and suspect it's missing bios files or zip issues. it's not worth my time.

The state of emulation has not improved in 20 years. All the effort is spent trying to keep emulators running on moving target hw/os. Yay.. another frontend. C'mon.

Sebi - my rage is not directed at you in any way shape or form <- to be clear.

Oh look what works perfectly (snes9x). Controls are a bit tricky on keypad but it works. 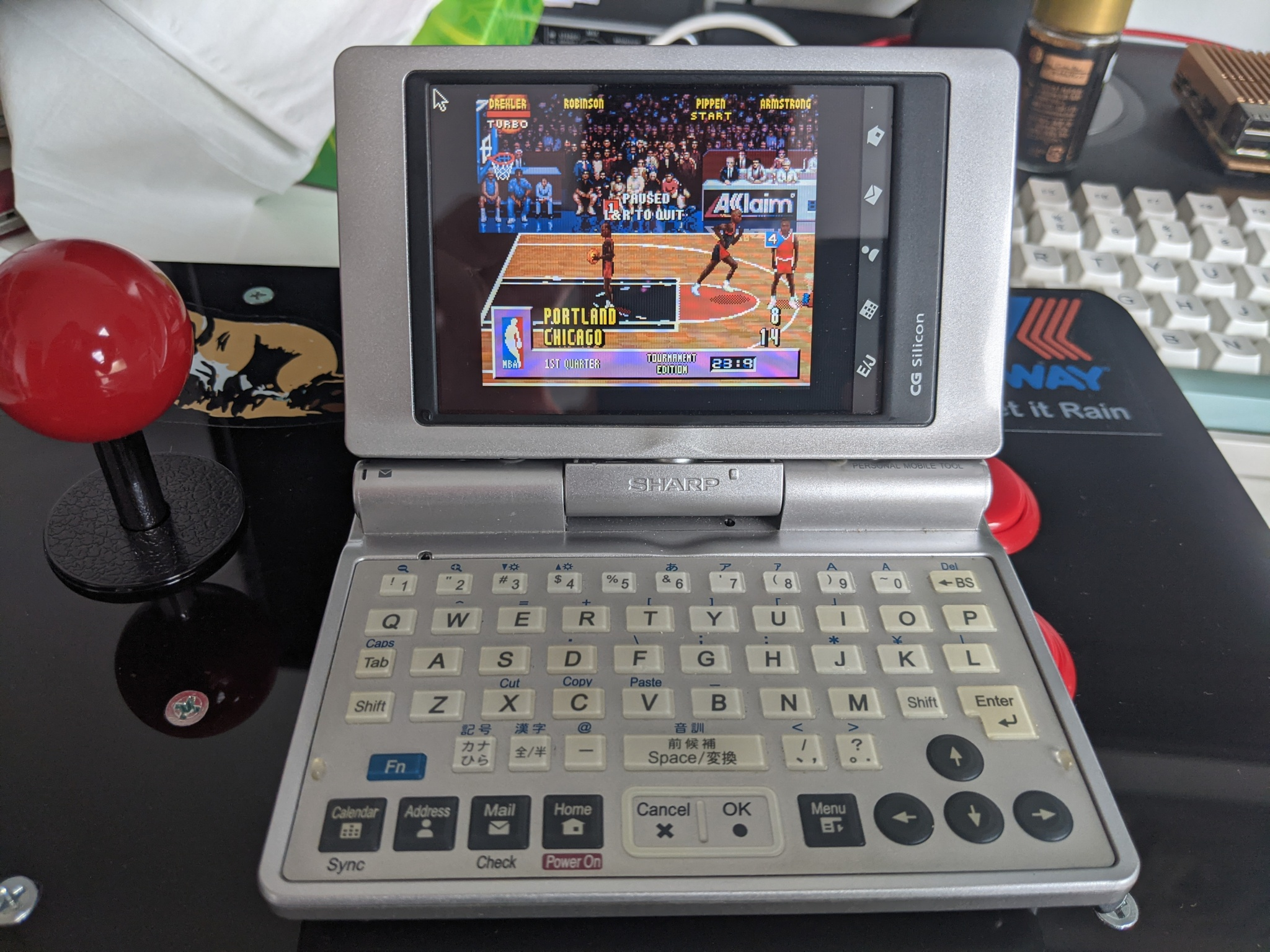 @ptitSeb - I know you're gonna say - oh just put this file here and voila!, but my hair is already ripped out.

Have a nice weekend

Yeah, gaming on Linux can be challenging sometimes. That is also why each Pyra package takes time to do... But hopefully, it's a plug'n play experience for end user on the Pyra (unless you want to build the stuff yourself...)

I uploaded a new build. I noticed I managed to somehow make the Pyra mapping wrong (while I tested psnes emu). So this version fixed it. Note that you will have to remove the appdata/pfbneo/config.cfg file (and maybe individual config file in "appdata/pfbneo/configs" folder to get the new mapping.

Yeah... linux generally continues to be a challenge. Same challenges as always actually. Not sure about mixing pkgs w/src compiles. I had success with that at one point but it was a lot of work.

I hope that for pyra os we prioritize stability above all. like, resist requests to merge in latest mainline debian. Even very savvy people are susceptible to vendor FUD and pressure to upgrade.

Strange I have allready installed the lib from the first post, but all of these new emulators ditnt start..

matzesu said:
Strange I have allready installed the lib from the first post, but all of these new emulators ditnt start..
Click to expand...

I had to install this, there where two choices of libtinyxml2, below is the one I used:

Code:
You must log in or register to reply here.