Just wanted to show off a PC I put together: 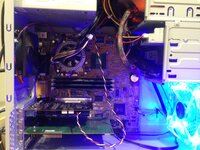 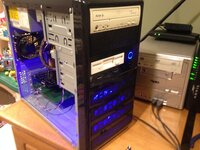 I was trying to get a machine that fit between late dos and win9X era.
I first tried installing win98se on that shuttle in the back, but it wouldnt take. That ended up with windows XP. Theres another pc on the floor also with win98, but a little fast (athlon tbird 1.2) and i wanted to keep the ati 9600 gp in it.
There was a third option an compaq presario 5000 with a celeron 533. As most of these cheap oem boards are the PCI just didnt work out right in dos. (mainly with sound cards)
So i was reviewing some of the other spare parts I had and if I had a socket 7 board I could put together a nicer slower pc.

So i found a asus P5-VM99 board. It has the ATX standard which helped. So I took the compaq psu, 64 ram stick, 3.5 floppy. The cdrom (6x4x32) wasnt standard with the compaq but i had put it in there at some point.
For the cpu I had a pentium 200 mmx lying around. I also add 2 more ram sticks with 32 mb and 8 mb respectively.
Im also using my original stick athlon heatsink on it. It was a but noisy so i switched it with the fan in the case. Looks ok for now the cpu has not gone above 40 C. I would like to try some noctura cables to Y split the mb connector and try one of speed control cables.
The board also has 1 isa slot which i liked, so if i want to get a isa sound card that could be an option. (thinking about an ESS audiodrive 1868F)

To finish the build off I put in my original owned 3dfx voodoo 3 2000 and phillips acoustic edge. I had a recent bought sb live 5.1 in it, but the dos drivers were not acting that great. The phillps card also has not been that great in dos, but in this machine it is acting not so bad.
So for now ill keep it in, and i moved the sb live to the shuttle pc. The athlon has a audigy 2 zs, which i working out great.
Theres also a 10/100 ethernet card in there too.
The case was a new from newegg and the cheapest one they had a the moment ~$20. It was ok but for one the standoffs ended up stripping, but it should be ok.

The voodoo is really the main purpose for this machine. Ive been able to get just about every glide only game that ive tried so far to work:
Archimedean Dynasty, Redguard, Land of Lore 2, Screamer 2, Carnivores 2

Well im curious about any comments anyone might have and maybe post more pictures of your own retro machine.

Nice. What are those apparently braided cables going up to the CDRW drive? Are they SATA cables or perhaps rolled up PATA ribbon cables a little like that shuttle-X ribbon cable I see going to the hard disc.

For my own retro machines, I have a Risc PC still set up. I guess I could take a picture of that. The first x86 machine I had was a Pentium 3 machine that had a really weird compaq case (I think) where the top drives could hinge up but not really enough to provide good access to where the hard disc was installed below. I never really worked out what the point of it was. I ran Archlinux on it, so it was never really a retro machine, just underpowered but running the newest software I could get. I get my retro goodness from emulation mostly these days.

the twisted cable is just a analog audio connection from the cdrw to the sound card. The program would tell the cdrom to play an audio track (redbook) and it would output on the cable and the sound card would mix it in with the sound. There is also a digital variant (spdif) but havnt really tried to use it.

I have a number of rounded ide cables that I had in the athlon, but didnt really all of them so I used one here.
Thanks for pointing that out cause i forgot to mention im using a sdcard to ide adapter with 32 gb card. Those things work great, i put one in the athon also. The shuttle is still using a sata hdd.

Ah, of course PATA/IDE drives were all chained together on the same bus. That's why there's that cable running up from the SD card adaptor to the CDRW drive; it's a continuation of the cable going into the SD card adaptor from the left. I'd have expected the audio cables to run to the sound card but they seem to connect to the motherboard in the corner. There's a twisted triplet of red, white and black running from the top cable bundle (might well be the CDRW drive) to the sound card, but I'd assume that only carries system beep, and may actually be i2c with it being three wires. Are those braids actually over the molex power cables?

Think the picture doesn't show it properly, but the cable as Pickle stated is going to the CD-ROM. It was common to just have 3 wires on those connectors, it was used to carry CD audio to the Sound card. It's a single ground, Left and Right. Cost savings? Don't recall I2C being used in any fashion of PCs of the era.

in the bottom right is the case io section (power switch, led, pc speaker) Theres also a grey/white cable which is the epower to the front fan with the blue led.
theres no i2c in this PC, its as TrashyMG stated.
Its kind of a mess in that upper section, theres the molex power connections, the floppy cable, the ide cable (the rounded grey). But im actually happy it ended up that way. Ribbon cables are the worst.

The undead PC :^)
FYI, I bought a Kingspec IDE ssd a while ago for an old laptop, it's working great.

so ive bought the first isa sound card to try.which is an opti 82c931. Looks and sounds like pretty standard sound blaster clone. Its got the wave blaster header for something like a dreamblaster card.
I was thinking about the ess audiodrive 1868F, but i saw this one at really good price. I think it will work just as well, at least sound examples on youtube sound good enough.
it also works with the unisound driver, which i think is a plus.

But what id really like to setup is a roland um-one midi device. I can hook that to the midi connector on the 15 pin and the usb side to either an XP or maybe even linux machine.
This would do the synthesis with any sound font and output it back into a line in to get any kind of midi playback.
phils computer lab shows how to do this with the falcon midi player.
The

Im thinking of making a video of the process of getting the card setup and play some things with it and just go over the pc build in general.

Wow, that shuttle in the back, I had one of those... That was my first PC to be used as a "media box" I still use the carry case for my Hades Canyon NUC

yeah that has a sempron 2800+, nvidia 6200, sound blaster live 5.1 and is currently running windows XP. Its got one PCI and AGP. Ive used on the onboard sound before, but the onboard graphics is bad.
It originally was running opensuse and was meant as a htpc with mythtv. But that was back in day with analog cable and standard definition. I was using a tv tuner card, probably a hauppauge brand.
I tried to install windows 98se on it first but it wouldnt finish, even lowering the memory to 512 mb (I think its maxed out at 2 gb right now )
It working good for mid 2000 type things.
Im thinking it could run the falcon midi player that i mentioned in the other post.

the Opti has arrived and it works great. I took a bunch of footage with the computer running different things.
Ill upload when i can (first have to figure out how to get it off this stupid iphone)

They are probably pretty rough, but any feedback is appreciated either if its about the video it self or questions about the PC.
First time ive tried to monologue and actually edit a video.

I got footage stlll for the the Opti card, it would be similar to the PSC706 video.
I actually snagged a couple more sound cards from a recycle center. I have a CT AWE64 Gold, ESS 1688 and ESS 688. I might do some video with these too.
I have the AWE64 in the P200 build right now and its great.

I long for those energy star bios screens.

Nice, reminds me of my youth, although any PC I played on in those days didn't sound as good as yours. I assume that flickering is an artefact of the mismatch of scanrates between the monitor and your camera.

Hey @Pickle I used to have a Philips acoustic edge. Did you get the cable with it, IIRC doesn't it have a mini-din style cable?

Good card but a problem if you lost the cable and in (what I have found to be) typical Philips style, they dropped support for it within a year or so.

I got mine in an OEM box from a terrible UK retailer call PC World and it came without the cable! I called Philips and they said they didn't sell the cable separately and wanted to know where was selling it without the cable.

The store manager refused to give me a refund even though I explained that without it, the card was useless. I explained that the UK Sale Of Goods Act of 1979, specifies that an item must be fit for purpose, which this was clearly not, i.e a "sound card" that had no way of making sound. He told me that it is "playing" sounds, just that I couldn't hear them!! And went on to liken the situation to me buying an oven and complaining there was no bacon given away with it!

I had two choices, take them to small claims court or build myself the cable and never shop there again. I found the schematic online, sourced the mini-din locally and did the latter.

Robert Taylor said:
I hope this is on topic, I just found this exists:

similarly i was surprised by this recently:

yeah the sound card design part was quite epic

and heres another one :

wish i had one of these to play with.
You must log in or register to reply here.