Here is the complete korean text script extracted from the GP32 game "A Little Girl Mill of a Ginkgo" better known as "Mill"
The texts are embedded inside the game executable, which make it difficult to extract.
Nonetheless, I managed to build a tool to extract all the text printed on screen calling the text drawing function at $0C001DAC
If someone reading korean would be kind to translate this text, I will gladly reintegrate it to a useable executable
so foreigners could play this game with more understanding !

Each line consist of the following informations:
OFFSET:NCHAR:Text

OFFSET = Hexadecimal address of the text in the gxb (unpacked/decrypted) executable
NCHAR = The maximum number of english letter that can be used for this text (don't overflow this !)
Text = The original korean text to be translated

If you want to translate this, please just replace the korean text by an english or french text.
IMPORTANT NOTE TO TRANSLATOR:
Don't modify the OFFSET or NCHAR numbers, and Please don't make a text larger than the indicated NCHAR number !

If the korean text won't display on your text editor, just load this text file in Firefox and set the text encoding to Korean.

Spread the word to any korean language reader fellow !

Ooooh, that would be awesome!
I bought the game back then hoping it would see an english release!

After spamming some forums and korean youtube videos, I found a nice Korean guy that is helping me translate the game !
I made some progress on the graphics editing 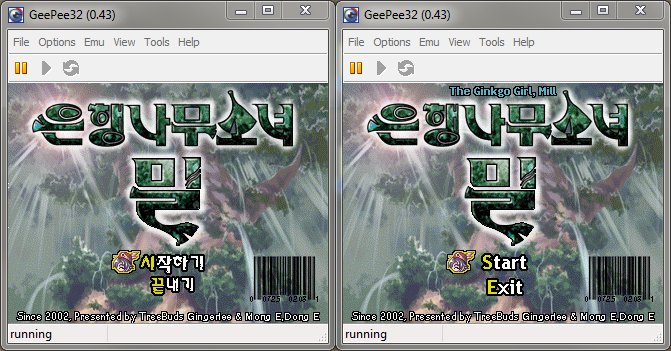 Wow, I thought that this would be an old and forgotten, but recent theme, believe me an account on this forum just to say that I appreciate the effort to try to translate this game.
PS: I'm using google translator, I speak Spanish, but playing this game in English to play in Korean, prefer to play in English

the patch was released here https://pyra-handheld.com/boards/threads/the-ginkgo-girl-mill-english-translation-patch.77333/
feel free to make a better translation if you are motivated
You must log in or register to reply here.
Share:
Reddit Pinterest Tumblr WhatsApp Email Link
Top