Game Of The Week - Captive!

I must admit this is a little bit of a cop-out, since most anyone who ever touched a real ST will know about this game. Its like doing a game of the week and mentioning World of Warcraft. Still, as I’ve been working on OutcaST for Pandora and Wiz this week, you will have to forgive me not doing my homework and picking a more obscure title. (To be sure, I will hit up Midwinter, Virus and the Sentinal later; also to be sure I will hit up the classics like Super Sprint, Nebulus, Time Bandits and Carrier Command all in due time.)

My selection process is a trifle more complex than you might think — while certainly targeting some of my personal favourites from back in the day, I am also using this project to encourage myself to fiddle with games I did not play much or at all back then and to this discover ‘new games’ — anyone whose done their time on ebay will be familiar with the term “NOS” - New Old Stock, meaning something old but that is in new condition — and this is no different. It is further complicated by the question — am I restricting msyelf to games that are ‘playable’ on the handhelds and sites I’m frequenting, or trying to raise awareness in some small way to the platform as a whole? Am I avoiding games that just don’t work in my emu but that work in other emus? Anyway, my goal is really to have a bit of retro wankery myself and to help provide some options or long lost friends to you guys as well, so I’ll try to keep them well rounded… though I may avoid a few trouble genres — I will have to mention Falcon and F29 Retaliator every other week, but as they are unplayable on handhelds and possibly on beefy desktops as well (with such modern 3d, it is hard to go back to 5 fps 3d right?

Also see my posting about the Atari ST, should you not know much about the machine; call it a basic primer if you will:

Captive is a game by Tony Crowther, his attempt to clone the delights of Dungeon Master but make it science fiction and even try to add some depth. A dungeon-romp with robot protagonists simply cannot go wrong.

Platform: Atar ST featured, but also upon Amiga and I think PC. A sequal appeared on the Miggy as well, but I never played it. Let me know if its worth pursuing

Play Now: Any emu of merit will handle it for your platform of choice. OutcaST on the gp2x, CaSTaway on the PSP, and OutcaST on the Pandora or Wiz, among others. (Hatari runs it fine on desktops, Wiz and Pandora, as do STeem Engine and moron and others.) For my emus, check input modes — I added a “cursor” mode that makes Captive and Dungeon Master more playable (d-pad controlling movement and shoulder triggers doing turning, means you can walk around very easily without reachign for the mouse or emulated keyboard.)

Author Background: Tony Crowther produced a slew of grand games back in the day and continues to develop console games to this day. He is not related to William Crowther of Colossal Cave (aka Zork) fame, though I forever make that mistake when the name comes up in Retro Gamer. In addition to Captive (and Liberation - Captive 2) he built Knightmare (another fine dungeon romp), and more recently has worked on the Burnout and Battlefield franchises. 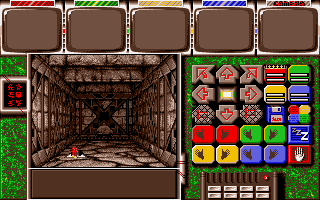 In Captive, you control 4 robots (akin to party members in your 3d dungeon romps), and delve into dungeon after dungeon across numerous planets. The backstory is some fellow is locked into a prison and somehow takes control over these robots in his attempt to gain freedom, and after working through some number of planets will eventually find himself. In practice, this is a 3d 90-degree graph paper style game in the same vein as Dungeon Master and Eye of the Beholder and Wizardry 5+ — excellent stuff.

While being an excellent all around dungeon romp in its own, it improves upon the formula. Many traditional skillups and upgrades are available for your party — new weapons (shotguns, etc) and new armor as in other games, but also new pieces of equipment and visors. These provide such abilities as levitation or a remote camera you can leave behind or perform mapping or act as a compass, and other handy treats. So while blasting away through an assortment of enemies you’ll often encounter situations where you’ll be swapping gear around to find the right combination to best make your assault. Very entertaining. Also curious is the need to charge up after using various abilities or taking damage, so you’ll frequently be keeping an eye out for electrical sockets in the floor so you can plug in. Cute.

The game does feature the usual dungeon trickery — locks with keys to be bought or found, walls to be pushed to reveal new areas and all that. Some cool additions are doors with combination locks where you can sometimes find clues, or just attack them yourself. (There are a couple kinds such as doors where you have to poke buttons in the corners in the right sequence, or hook up wires in the right pairings. Its been a few years of course, but I remember enjoying these early mini-games for awhile; after awhile it did get tedious for the longer winded lockpicking attempts, but the whole concept of mini-games is only now gaining much popularity and yet you find it here back in 1987..)

One point of interest is the majority of dungeons are ‘generated’ (not randomly, but using some variation of a fractal), meaning some dungeons are just outright bizarre; still, much balancing must have been performed since rarely did you find all monsters clumping at the end and other classic blunders in generated dungeons of today.

An excellent all around classic RPG providing hours of entertainment.

Ah captive! A really original game. The plug sockets were a life saver if you ran out of ammo, just stick your finger in the socket an start blasting bolts of electricity.

Favourite enemies in the game

Antigrav - sometimes secret rooms were only accessible through holes in the ceiling, and you had to wait until you had enough cash to buy these so you could stick to it
Remote control camera - this was great for sending into areas where you weren't sure if there was something nasty waiting for you or not.

Also loved the way you had to fly to the planets first too, put 'the swan' into orbit around them before dropping a lander down onto the planet. Excellent game, well worth playing.

Skeezix, for a future game review, might I suggest Captain Blood? That game looked great, but I had no idea how to play it.
C

I want to also recommend a game, though for atari 8-bits instead of the ST.

This is an excellent modern Atari 8bit release. It won a contest in 2007. Great music graphics and game play. It's one of those games that are quick and simple to play. The music and sound effects come together pretty well. It's worth a try and it's freeware. If you really like, I believe it's available as a cartridge compatible with the Atari 8 bit line.

fade -- I've thought of Captain Blood a few times; for my part, it seems 'gourmet' for me -- bu gourmet I mean food that looks like someone spent a whole lot of time making it lok good, but usually it does't taste as good as it looks Captain Blood has some music by the amazing Jean Michelle Jarre (spelled wrong maybe), but I thought the game.... cooler than it was playable. I realize everyone else in the world loved it, but it didnt' turn my crank

christo930 -- you write it up I am trying not to claim the 'game of the week' thing all to myself; I have limited time and experiences, so I'm rather hoping others will jump in with theirs. Have at (Even if you only do 1, why not?) Feel free to post it yourself, or send it to me and I'll post it alongside my next one.

I know what you mean, it was one of those games that just had such great graphics and music that I kept thinking something else was going to happen an I must be doing something wrong

I had forgotten that you had to blow up each base you visited by sticking dynamite in the generators and doing a runner!
Last edited by a moderator: Dec 20, 2015

Hoping to post this weeks tomorrow; another one that seems 'obvious' to me, but maybe not to others..

This is a nice little game, gave it a whirl a few weeks ago and loved it. Just struggling to find time for all the games I'm addicted too. :huh:
You must log in or register to reply here.

Anyone Want 'game Of The Week' Recommendation?

Game Of The Week - D/generation!

Game Of The Week - Swiv!