In case its of help to someone, here's how I let the blue smoke out of my Pyra and put it back in again. The schematics and datasheets being open source means I can write up the experience from the now repaired Pyra.

As you may have read, I've been adding heatsinks and cold fingers to my Pyra to eek out more clock cycles from the OMAP (and for entertainment). I had been careful to cover the CPU board and nearby components with kapton tape to avoid shorting anything with the copper sheets. I've made a few iterations of the cold finger and have taken the motherboard out several times now. Unfortunately. the kapton tape had come off over this little blighter, the big capacitor on the edge of the CPU board and between the USB ports. At this point, we have VSYS and GND close together. That capacitor is useful as an edge stop against the CPU and makes it easy to plug the CPU board in. 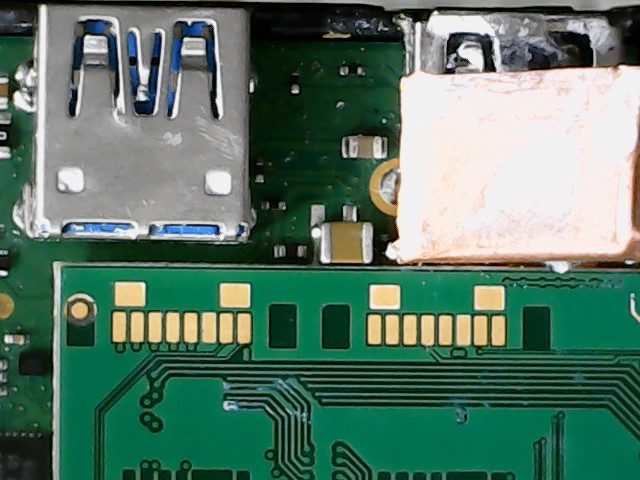 After shorting this capacitor, the Pyra would only turn on for a few seconds and then would shutdown again. I took the heatsinks out but still had the same problem. The display stayed off but LEDs usually worked. I tried connecting to the serial port (micro USB2) and I could see the boot log running for a few seconds but it stopped abruptly after something warmed (the time got shorter each time I tried until after a cool down). After the few seconds elapsed, the power LED went yellow then nothing at all, no LEDs or anything. I believe the yellow power LED indicates a fault state from the power management chip.

My next step was to take the motherboard out and look for damage. There wasn't anything obvious at this stage. So, I removed the CPU board from the motherboard and tried powering up from the USB. I checked for 5V on the USB connectors and VBUS test points. OK so far.

The Pyra takes power from the battery or USB ports and has a BQ24297 battery management chip to maintain the system voltage whilst charging / discharging the battery.

I tried to measure VSYS on the test point at the far left of the above image. I saw some unusual voltages here, like 2.2V and then 8V! It varied each time I powered up the board. Oh dear! I noticed a hot chip smell too, and checked the BQ24297. It was hot, as was the nearby IO expander chip.

There's a note in the BQ24297 datasheet saying that if VSYS gets shorted I need to power up the board through VSYS to reset the chip. OK? So, I used a lab power supply to power the pyra through VSYS at 4.5V limited to 2A. With the CPU inserted, the pyra booted up fine like this, and seemed happy enough. However, at this point blue smoke escaped from the BQ (BBQ?) chip which then de-soldered itself, along with its 1uH 2.7A coil! 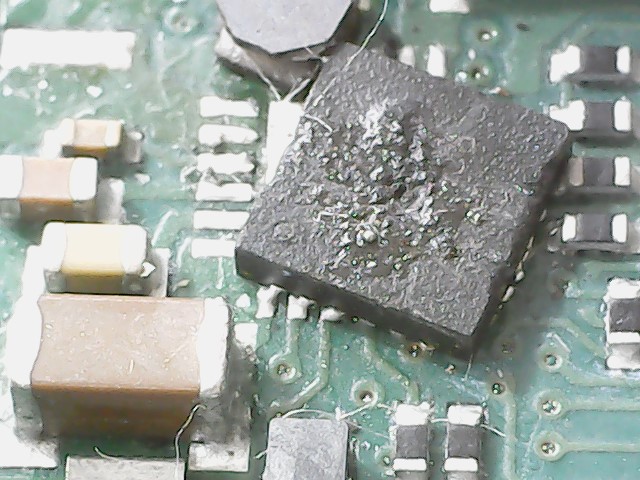 Well that simplifies the problem at least!

Luckily, I've got access to a hot air soldering reflow pencil and PCB preheater. They cost about €150, e.g. CSI 853B+ and there are plenty of good YouTube videos on soldering QFN chips. I ordered a replacement chip and a couple of inductors from eBay and they turned up 2 days later. 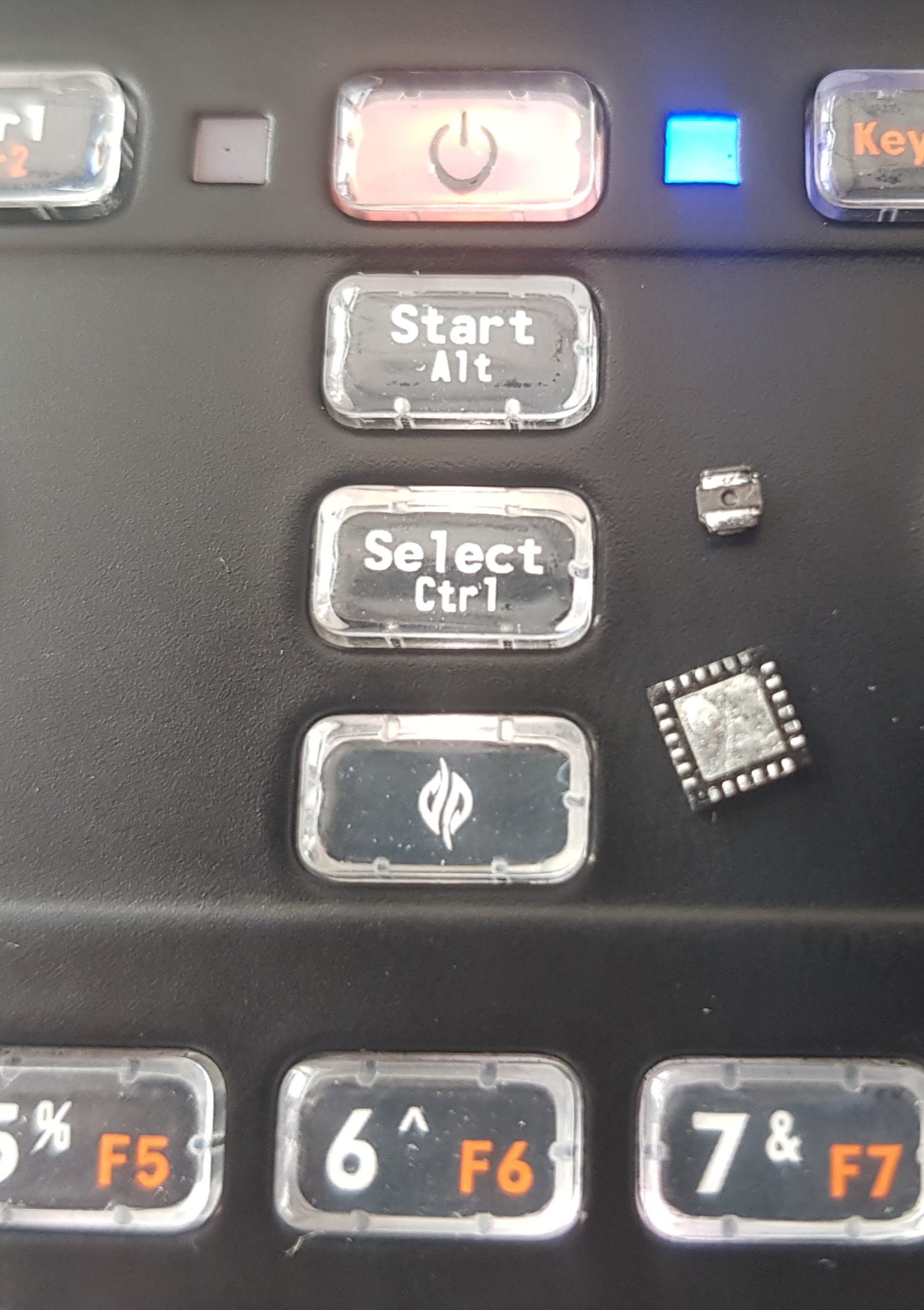 After replacing the chip and coil the Pyra is back to life! 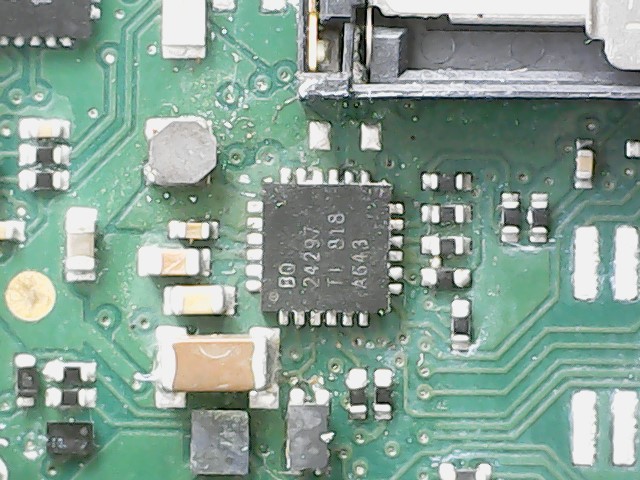 This time I've applied some enamel paint to the capacitor to avoid shorting it again. After being more careful with the Kapton tape, I've reinstalled my heat-sinks.

Thanks for listening. Going back over the experience has helped with the PTSD symptoms! Is my warranty still valid now I've fixed it?
Last edited: Apr 7, 2021

What an adventure... I start sweating only by the idea that it would happen to me...

Congratulations for a second life of your Pyra!

I think to be in the clear you should link back to this thread if you ever need your Pyra repaired under warranty, but I'd have thought not resolding the burnt chip and hoping it to work but instead buying a new one would win you some brownie points on that scale.
A

You are my hero!

You have the guts to get a 700€ device (mostly irreplaceable at this moment) then start hacking the case, the heatsink and just don't mind burning a critical component on the the board.

P.S.
Your Pyra doesn't have a wonky chip anymore. That makes it a super exclusive edition?

If I remember correctly, the wonky chip was gone on the mass production boards, so it’s not that speziell,
But it’s impressive what you done..
i mean it’s a bit risky to hack when there are just a few other Pyra out, and it not that easy to get a new Pyra, but you fixed it ^^

I also don’t treat my Pyra as the super rare device it is, in fact there is allready a bit tear on my case because I carry it in my pocket every day, but still not that visible..

Have you taken any photos of the tear yet, Matty? I'd be interested still to see how this plastic reacts to friction. 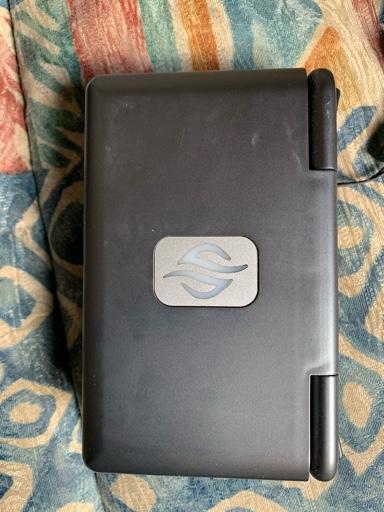 asimov-solensan said:
You have the guts to get a 700€ device (mostly irreplaceable at this moment) then start hacking the case, the heatsink and just don't mind burning a critical component on the the board.
Click to expand...

asimov-solensan said:
You have the guts to get a 700€ device (mostly irreplaceable at this moment) then start hacking the case, the heatsink and just don't mind burning a critical component on the the board.
Click to expand...

Reminds me when I bought a new $600 point and click digital camera, wasn't top shelf, but image quality was good at the time, think a whopping 2 Megapixles back in 1998-99 and literally took a rotary tool to it after owning it less than an hour, I hacked out the camera chip and extended it to allow me to fit it into a broken Canon AE SLR camera and thus made the ugliest Digital SLR camera.

The Pyra is precious, but you still have to let them out to cross the road on their own sometimes, or even for the occasional high ropes adventure.
A

Nice! My GPD win had dead battery, I printed an extended bottom case and fitted there four 18650 cells.

Are pyra stl files available anywhere?
You must log in or register to reply here.

On the upgradability of the Pyra
4 5 6