I was looking for something like a smartwatch, that later on I could use to navigate and view exposed options and notification of the Pyra and invoke actions with.
Actual smartwatches don't seem to cut it for me for many a reason - battery life, Android. Given the nature of the enumeration the latter serves as an collective term.

Of the OSs, I know about, out there postmarketOS would be my favourite and the only interesting one to me, but they're not there, yet, and I'd be of no help to change that. I hate nothing more than trying to get something to work that's isn't either intuitive or somewhat usefully documented => I have no skill in that area. (I'm talking about the hardware, if you're unsure.)

Then I was thinking something Arduino would be nice - given that I'm the kind of developer, who's utterly dependent on others to setup a project (make, git, etc.), something like "Put your initialization stuff here and your other stuff in the function, that get's called in an endless loop." would be perfect for me. That's almost all I know about developing for Arduino, btw, but it seems feasible.

Now, for the life of me, I cannot find any wrist-worn housing for some Arduino stuff. I'd want something molded or CNCed or whatever - basically way more refined than something 3D-printed.

Ideally, it would be a complete and preassembled kit or finished product and I'd just start coding, but if that's not an option, I'd be up to the task on:
- buy soldering equipment and do the electrical assembly myself
- if there's a nice housing not made to be wrist-worn but otherwise an adaquate choice, making and attaching something wristband-ish to it
but not doing hardware work on the housing itself. Done by me it'd end up ugly and without the qualityies I look for and I wouldn't be happy with it. And I'd have no ambition to do it over and over, til it works out or something. Not for being lazy - lack of interest in creating things by hand. Or, if you will, I'm a perfectionist, but have the skill of a toddler, when it comes to those things - it's no fun.

What I needed to go in there, would be some Arduino base module, of course, if not already there something for Bluetooth connectivety, a Display, an additional rgb led would be a bonus, some accoustic output thingy like a buzzer, a means of input like four buttons or a scrolly thingy and two buttons, a battery, and having an accessible usb port would be great. The housing being prepared to get it rain-proof would be important to me, too - again, I've got two left hands while being right-handed.

Then the housing shouldn't be too thick - 2 cm would be pushing it , I guess. I wouldn't mind a multipart housing to be distributed around the wrist, though, as long as the thing brings the means to interconnect the parts rain-proof.

So, that's what I'm searching for unsuccessfully. If anyone know's something, that'd met my demands, telling me about it would be very much appriciated.

Adafruit's "Feather" range of µC devboards might be of interest - particularly:

Those, between them, would give you an arduino-compatible microcontroller, Bluetooth radio, Battery management, a display, and a few buttons.

3D printed parts don't necessarily have a poor finish. There are companies out there who will build your model with their expensive industrial 3D printers, and do manual post-processing work too.
H

The M5Stack torpor posted about recently, I noticed it has a watch option, though it does seem rather big for a watch. Thread:

HelenF said:
a watch option, though it does seem rather big for a watch.
Click to expand...

...and out of stock at the moment, sadly:

Aliexpress has a photo of someone wearing it - looks uncomfortable

It was getting 5 star reviews so maybe it's better than it looks?

Anyway, as Binky pointed out, it's been out of stock for quite a while, and no sign it's coming back. 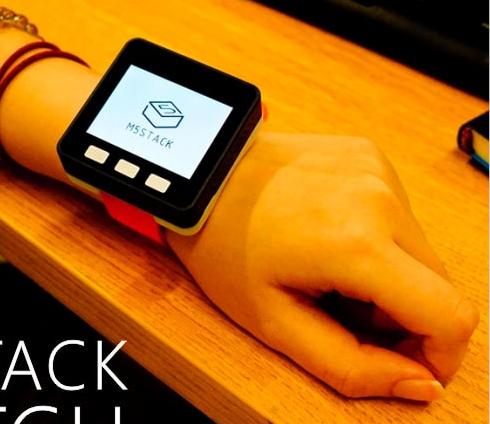 @Blinky Thanks. Though I guess the particular hardware variant might depend on the housing I deem most worthy in the end. On another note, I haven't figured out yet, what the Feather line is about - what makes it what it is.

I guess another reason, I'd prefer a molded housing thingy, is that I'd expect rubber seals or simailar rather on that, and I'd hope for it.
Well, when it ultimately comes to 3D-printed stuff, there's always watchX, I guess.
But I'm not ready to give up hope.

@HelenF Thanks. Could be an option. I havn't seen that, yet. Might be necessary to get my jacket sleeves expanded, though.

Hm-kay, I guess I byte down on that sour apple. I'll get me the parts and breadboard 'n' co. and go for a proof of concept run. Which btw means, in a couple o' years I'll need to actually get my hands on a Pyra to start get working on the counterpart.

So now I'm about to identify MCU and display products, that have the features and dimensions, I'd like.
Iff you already know, does the Bluetooth standard prescripe sufficient security measures, which therefore would be implemented in hardware anyway, or is their BT hardware that does and some that does not, or will I need to see to that and thus should choose an MCU, which offers useful features in this regard?

@Djoga'Ro thanks for the tipp about the watchX! I was looking for a DIY smartwatch like device, sans the surveillance that comes with the major brands and customizable/hackable. This product looks perfect and a lot of fun. I tried buying one online but it seems the only place to get these is robotistan.com right now, which seems to be a turkish maker shop. Sadly they only accept credit card payment, so I had to register for a virtual credit card and am now awaiting verification of my ID. Why is this thing so hard to purchase anywhere? Is it just so fresh, that they didn't find other vendors yet?

I think this might be a product @EvilDragon definitely needs to sell in his shop! I'll open another thread for that in the DragonBox section of the forums.

@xnopasaranx You're welcome! I'd buy the watchX, but I fear it has too little (RAM+storage) for what I want to do. A friend of mine bought it. I think he could order it on indigogo. He had to email the manufacturer/designer first to get help finding the correct site/page, though.
?

Wow... it took me three freaking days to order the watchX... well at least it's done now. What a horrible experience ^^. I have given them some feedback on this in their forum, and they said that robotistan will not stay the sole vendor of the product. Apparently they want to roll it out on amazon and aliexpress. I have suggested to them, that they may also want smaller online shops to sell their product, as the hacker community is more likely to shop there (unless you already know exactly what you want, do you browse and shop on aliexpress?).

I tried to find things on aliexpress, for which I could only provide some constraints. It's not effective.
?

Yay! The parcel has passed turkish customs yesterday and tracking says it's on it's way to me right now. So with some luck, I'll have it today. Then again, our dhl delivery guy has apparently quit his job and we have random dudes delivering/fucking up deliveries instead now pretty sad, our old dhl guy was really nice and very reliable, also knew the neighbourhood and where he could drop parcel when noone was home. Fuck outsourcing...
?

okay the parcel really was delivered today and I promptly assembled the watch. I ran into trouble uploading sketches on my manjaro systems and was not able to get it working (the arch wiki wasn't helping sadly), but I switched to another OS that shall not be named and uploaded a couple of sketches. I like it a lot and will print a case tomorrow at work. couldn't get the compass calibrated on the firmware I am using right now. battery life seems okayish and strongly dependent of the powermanagement, which differs from firmware to firmware. I am running something right now, that will put the device to sleep and wake it up after shaking and turning the wrist.

But don't you need some hardware entity to do the math for shake-and-turn-recognition constantly?
You must log in or register to reply here.

Anybody have a brand new Pandora casing/housing for sale?

L
Is My "cracked" (Coming Apart) Pandora Covered By Rma?