Any news on getting Ubuntu Netbook Remix to run on the Pandora? 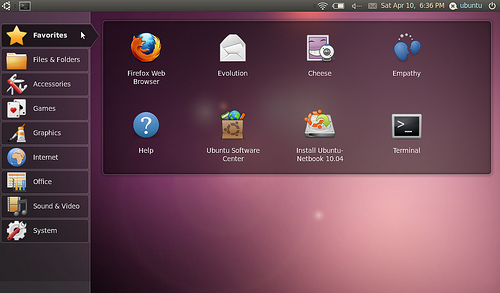 UNR depend on OpenGL in many ways.
"Luckily" Canonical also a little brother UNR-efl. Which is based on efl instead of cairo.
But it segfault because some gnome deamon dont respond using dbus...
Someone motivated enough could bring that to live

Cairo has an egl backend.
F

Looks there is a lot of work going on at TI, Linaro and Canonical to support OMAP3 and OMAP4 chips in upcoming 11.04 Natty including 3d acceleration. They currently support beagleboard and pandaboard.

Location
Tired, and sleeping in the basement...

Last time I tried this, it died on it's face... I've only been marginally successful with Jaunty - anything newer seems to give up while booting. Maverick was particularly painful as it's aptitude would randomly lockup and die just while fetching packages! And if it did it while installing something, it could potentially bork the entire install.
From what I could tell, it was ureadahead that was causing the issues, so perhaps compiling a kernel with a mix of the Pandora specific and Ubuntu patches would work, but I didn't have a setup to do that when I originally looked at Ubuntu.

Hopefully their next release "just works", though I have been working on getting Debian Pandoraized with pretty good success, if a bit forcefully Should be pretty stable now though - minus the PND stuff due to library inconsistencies.
You must log in or register to reply here.
Share:
Reddit Pinterest Tumblr WhatsApp Email Link
Top