Inductor broken off board

For a few days now I've been experiencing problems that suggest a damaged LCD cable - some colours being displayed incorrectly, things on screen appearing to leave coloured streaks to their right.

Then just now, I knocked my pandora quite gently (put it down on a hard wooden table) and the LCD backlight went out. Shining a bright laser onto the screen at an angle confirmed that it was the backlight, and that the colour-filtering element of the screen was still working correctly.

I opened the back and noticed that a small inductor, marked "223F", with a curly 'C' (manufacturers logo?) was at an odd angle. It promptly fell of when I touched it, to reveal two pads, and the bottom of  the component, which now has two tiny copper wires hanging out.

There are small indentations visible where the copper wire was held (not very well) into the solder pads. 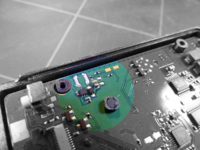 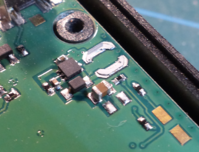 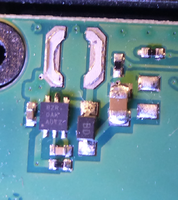 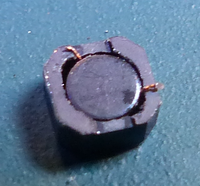 The question is, what should I do?

But they didn't show detail as to exactly where/how it had broken.

I know my way around a soldering iron - hot end, cold end, reel of tin-based melty stuff, etc, but don't have experience with small surface-mount stuff. I also don't have a suitable replacement part.

I haven't done anything horrible to  the unit, and its less than a year old, so it should still be in warranty...

...but then I'm a bit nervous about sending expensive electronic toys equipment to Germany and back through the post.

It also feels a bit silly to spend pounds to replace a part worth pence.

I've also no idea what the part does, except that its something that makes the backlight work, and doesn't affect much else.

The whole pads came off. Send it to ED for fixing or buy the part, remove the solderpads from the board and try to solder on the new one.


Edit: Those don't seem to be of good quality when they come off that easily... Is there any physical stress on them in the case?
Last edited by a moderator: May 30, 2014

There is a part that currently reads 'impact damage to inductor' http://pandorawiki.org/Hardware_defects
Last edited by a moderator: May 31, 2014

Well, the pads fell off, but the wires are still there - which can be fixed with a soldering iron if you're careful (did that about 10 times already).

There shouldn't be any special stress. It lives under the battery just by the top right support pillar.


One might speculate it's because the board is weakened there by the hole for the support pillar, and might flex due to slightly different movements between the pillar, battery and case edge, but I've dropped mine on carpeted floor more times than I care to mention and mine's still rocking fine.

The soldering holds, it's the part itself that breaks.

Maybe there was a quality issue with one batch of that part.

Is failure of this part a possible cause of the incorrect colours being displayed? (I doubt it)

If not, I fear I shall have to send it back to be fixed, since both LCD cable replacement and SMD soldering are jobs best done by someone with a lot of practice.

I'm a little curious about the dying LCD cable as this is a Dec 2013 (upgrade) unit, and I thought the better cables had come into use by then.

Are both the failing screen cable and the broken inductor covered by warranty?

Some of the new ones still go bad sometimes (can also happen if not carefully put in).

And yes, both is covered within warranty.
You must log in or register to reply here.

Hardware No backlight after changing the screen

A
Screen stopped working (need to buy a 223F capacitor)