This is another review from my review blog.
Thank you who ever put my other one on the homepage. 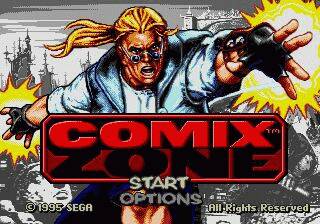 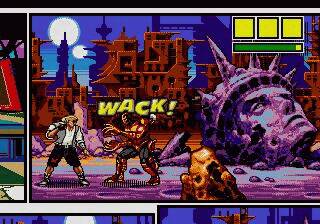 From what I can tell from the pictures (most text in Japanese) the storyline is that a cartoonist gets trapped in his own comic by some random evil dude, he then has to work his way through the comic story fighting the enemies drawn by the evil guy to escape.

EDIT: You can play the game in english, as pointed out by grahf, I was right about the storyline though.

The graphics are excellent in this game, this is one of the few games I've played which I would consider the graphics seamless, every frame of the comic looks like it was drawn individually (well, as in a real comic many scenes are repeated, but they still look great) and there is no obvious grid. Considering that this game was made over ten years ago, I think the overall effect they create is better than many much later games. They really make you feel like you are in a comic. These screenshots don't show off the graphics as well as the game I'll probably take my own later.

The gameplay is great, and the controls are simple: A - Attack, B - Jump, and C - Use item. There are a variety of items for you to pick up (three items at any time) and use to your advantage, like throwing knives, healing and use drinks and explosives. Most of the other controls involve movement which is an interesting approach, to use a lever you crouch to grab it then press A, or to pick up an item you crouch over it etc.

Overall an excellent game. Great story, some of the best graphics I've seen in a game of this period, and excellent gameplay. There was one element that annoyed me though, you cannot save and have only one life, so falling off the comic means you lose all your progress. Obviously you can get round this with savestates, but I like to avoid using them where I can. The ROM is 2mb (or 1.1mb zipped) which is very small considering the quality of the graphics. This game really shows off what a MegaDrive (or at least a GP2X with an emulator) can do.

EDIT: You do have more than one life, (I haven't found out how many yet thanks to savestates but I'm guessing three.) actually all this means is that I like this game even more, although there's a long jump on the first level is pretty hard.

Aninhumer posted on Feb 23 2006 at 11:49 AM said:
The gameplay is great, and the controls are simple: A - Attack, B - Jump, and C - Use item. There are a variety of items for you to pick up (three items at any time) and use to your advantage, like throwing knives, healing and use drinks and explosives. Most of the other controls involve movement which is an interesting approach, to use a lever you crouch to grab it then press A, or to pick up an item you crouch over it etc.
Click to expand...

Location
From US, currently in Tokyo, Japan

I really like this game. BTW, you can change the text to english in the options menu.

Heh, That's what I get for being impatient
Last edited by a moderator: Feb 4, 2016

Comix Zone is one of my favourite Genesis titles. Amazing graphics and smooth gameplay, with an original concept - brilliant. It runs fullspeed with sound on the GP32 (DrMD), with FS2 and OC'ed to 166MHz.

got me a date with botticelli's niece

Location
up on cripple creek

there is in fact an english version of the game...actually i think the team that worked on the game was mostly american.

anyway that game is incredibly difficult without a six-button controller. even with one, it's crazy hard.
T

I bought this game when it first came out on the MegaDrive, based purely on the box. The idea of fighting your way through a comic book was just brilliant! It came with a soundtrack CD full of cheesy metal songs, I still give it a spin every now and then.

But even after owning the game for over ten years, I still can't beat Mortis at the end of the game! Anyone got any suggestions?

I love this game. I got it when it was first released. It is still one of my favorite games for the Genesis. I feel it is one of those great games that was made for this system.
J

Damn, just look at the two:

So, why does everybody want a GBA emulator for again?

Way back when I had a job in a computer store, and when not playing Mortal Kombat 2/3 against eight year olds, I would play Comix Zone.

Such a good game! So good, in fact, that I can't believe they've never made a sequel. The concept could really be taken forward with the inclusion of ideas from Manga comics.