Go to download
Overview History
TileWorld is an open source interpreter for
Chip's Challenge levels. Chip's Challenge remains
a popular game today, despite having been
introduced in 1989 on the Lynx handheld. The
version that truly launched Chip's Challenge,
however, was the Microsoft Entertainment Pack
version released in the early nineties.

Tileworld boasts improved tile graphics and
sound and fluid animation that the MS version
did not.

I have carefully ported TileWorld to the small
screen of the GP2X, and basically rewritten the
entire GUI, as well as a lot of the file handling
code and all of the sound code. TileWorld2x
boasts improvements over the desktop version of
TileWorld, including music support, improved
sound samples (OK, one), a simplified and prettier
GUI, and automated handling of configuration files. 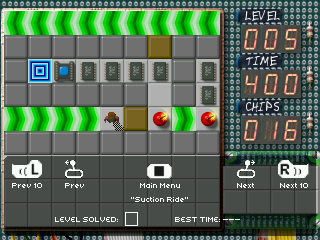