A very simple 'step file' (.bxe) generator for the Beat2x interpreter. This version run in Mono in Linux, and behaves exactly the same as the Windows versions that runs with the .NET Framework.

It basically plays any .wav, .mp3, .ogg , and possibly other formats (any format that mplayer accepts), while allowing you to create a .bxe file simultaneously with some key presses. It certainly beats going into Audacity and looking for the milliseconds.

This version requires and performs correctly with the following packages-

(1) mono-core (version 1.2.5)
(2) mono-winforms (version 1.2.5)
(3) mplayer (version 1.0rc2, although most if not all versions should theoretically work - check in the packman repository) or another audio player that plays the formats you want (check out config.ini)
(4) dos2unix (to allow the program to convert the .bxe to the UNIX format after you're done)

(1) Modified the algorithm to calculate the time elapsed from the time the player starts to the time a key is pressed - Much more accurate (was a huge problem with the Linux version)
(2) Added a configuration file called config.ini that lets you choose the media play you want the program to use. Has a total of two option at the moment but this will expend in the future.
(3) Added a line that converts the final .bxe file to a UNIX text file using dos2unix (hope you have it installed )
(4) Added massive amounts of exception catching (Linux version)
(5) Added a lot of exception catching (Linux version)

Updates/Enhancements as of version 3.0 Linux

(1) Using mplayer should allow you to playback virtually any file format.
(2) There is much more Linux- centric exception catching in this version, for things like file permissions, etc
(3) The 'Help/About' button on the top right displays basic information about your mono and mplayer version - useful for debugging purposes. 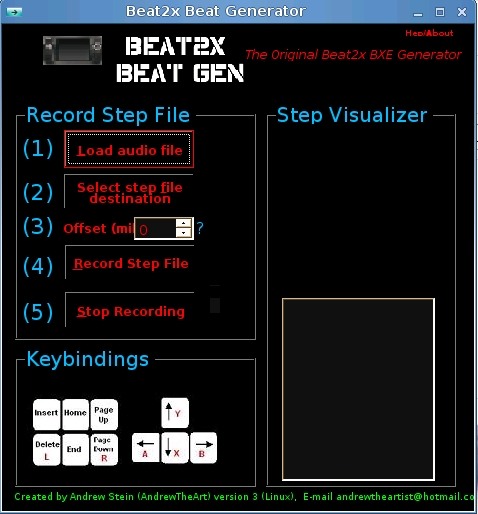