My entry for the Pandora Angst Coding Competition. I didn't place really well, though :rolleyes:
After some modifications, here comes the current version. 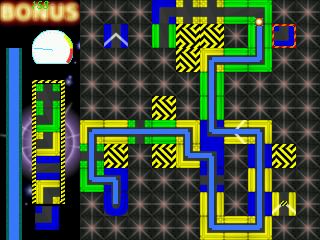 Okay, here comes some criticism because it's harsh.

First off is that the game seems unbalanced, I often found myself forced into corners because the game would actually give me the same tile over and over, I'm not expecting it to give me the tile I need right away, but to at least give it to me. Getting the same tile twice in a row is tolerable, but thrice isn't, tetris avoids doing that for a reason. I've often found myself having to wait 20+ tiles to get something I need to complete a section.

There's a lot of unintuitive quirks in the interface, I could list them out.

The game could be much more intuitive if you made some critical changes.
G

thanks for the feedback and the useful advices, I'll try to improve the game they way you recommended.

if you play a level multiple times after finishing for the first time, you get less points for each tile (including penalties). the second play is 90%, the third is 80%, etc (you can see the multiplier on the level chooser screen)

Rupee Clock, those were very good suggestions. Glezmen, I will try the game again and give you some feedback too

Ok, i've been playing it for a while.

- First off, i love the story. Brilliant. Great humor with things like "all bunnies on earth will die" etc.
- The game guides the player well, tutorial on the first level, not giving too much info, just enough, and then the second level adds a little more. That is very well done
- I don't like so much that i score less the second time i play a level. For games like this, i often compete with my gf on who gets more points, but this scoring system assumes only one player. I'm not saying change it, it is just something to think about
- Animating the next tiles would look awesome. Both me and my gf didn't know at first sight which tile is the next. All you need to do is let them fall down. Another cool thing might be to animate the next tile over to the cursor so you clearly see you placed a tile, and you clearly see which one is the next one. Small feedback like that is what makes or breaks a game i think
- Maybe the current tile should be semi transparent. This is again help with visual feedback, so you see what's underneath. I could be wrong about this, try it out and see how it looks/feels
- What is the difference between the levels? The starting position seems to be randomized, so when i retry a level it is not the same level. Initially i am thinking each level should be fixed with fixed set of tiles so that you can replay it and get better and better. In fact, that gives me an idea. You could have a LEET score or medal if a person manages to fill the entire screen. So the tiles provided make up a complete path on the whole screen only they are randomized. I believe Tetris does something like that
- It says "penalty" even when i complete a level. I understand why, but i think the player should be encouraged when he wins, i.e. say "penalty" when you remove the unused tiles, but after that there should be some winning ceremony. Although i don't like penalties much in games, and when used, they should be used in small quantities. In fact, there is nothing telling me if i should continue placing useless tiles while i am looking for what i need to make the path longer, or if i should stop and avoid placing bogus tiles everywhere. I'd say, skip the penalty for unused tiles, definitely. I think it is bad for the gameplay, and even brings the player down when he just completed a level.
- As RupeeClock said, the tile you want might never come. But i don't know, that could just be part of the challenge
- Instead of different colored tiles, maybe make it visual some other way that green tiles slow down the ball. So you can see the tiles purpose at first glance instead of needing to memorize the colors for next time you play it
- Playing with the stylus doesn't work so well. But i don't think there is much you can do about that. Ah, and hide the mouse pointer, and of course you should be able to start the game without stylus
- Of course, there are also more positive things The game looks great, and it works. I haven't found any bug and that is very important for the experience imo
- I love the level selection screen. Brilliant way of following through with the mechanics all the way

All in all, congratulation on what i think is the first (non-bennugd) game in the archives

Uni: thanks for the detailed feedback!

RupeeClock, Uni, do you have a few minutes to try the new version?
changes:
- you won't get two of the same tile after each other
- queue animation
- changes in the cursor
- brighter images, so it's easier to recognize the dark tiles
0.9.1
G

i've just uploaded a newer version to the archives with music

Hi glezmen. The animation of the tiles looks good it is very clear now that the next tile is at the bottom.
G

It takes a while. There is only ED who approves so you just have to be patient
G

0.9.2 uploaded to both WIZ and CAANOO archives: